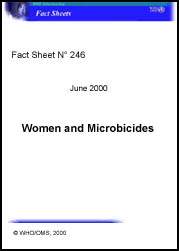 · Most of the world’s women do not control when, with whom and with what protection, if any, they have sexual relations.

· This powerlessness is most acute in developing countries where HIV prevalence is highest (20-30% in women) and where the epidemic is escalating.

Now rather than later

Lack of power and autonomy is the root cause of women’s vulnerability. But empowerment will take generations!

Why must the technology be controlled by women?

· We know from experience with contraceptives that when women control use and when they do not need to involve their partners, the method is used more effectively.

· Condoms (male or female) offer protection but they are not used and women cannot control their use. Studies have shown very low use of male condoms even in favourable circumstances.

· A cream, gel or suppository that can be discreetly inserted into the vagina before sex. Ideally it would kill or block not only HIV but also other sexually transmitted infections.

· For the many women, especially in developing countries, wanting to have children, we also need a microbicide which is not a spermicide.

The spermicide nonoxynol 9 which has been available for many years and was generally regarded as safe, kills HIV in the test tube and provides a physical, “gooey” barrier which sperm and microbes cannot penetrate.

But it has recently been discovered that it causes vaginal lesions which could then be entry points for HIV.

Some argue that in the trials, which were halted, it was used in far too high concentrations and in women (sex workers) who were using it several times in an evening. This does not represent typical use.

Why so little research?

Sixty candidate microbicides are in the pipeline; but none will be available to the public very soon.

Research and Development is being done by small biotechnology companies, individual academic researchers, on shoestring budgets.

Development costs tens of millions of dollars which only the big pharmaceutical companies have.

Trials must meet high ethical standards, e.g. all women enrolled must use both condom and microbicide; huge numbers of participants required and will be very costly.

Microbicides are not seen as profitable; principle market being poor women. Advocates argue that the potential market is larger than this.

Some advocates say candidate microbicides should be distributed at low cost to women in need, before further testing. They are generally regarded as safe, we just don’t know how well they work - 80% or 30% efficacy.