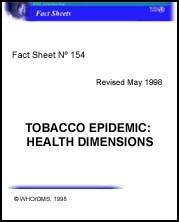 There is no longer any doubt that tobacco use worldwide has reached the proportion of a global epidemic approaching its peak among men in most developed countries and spreading now to men in developing countries and women in all countries.

· Today, according to WHO estimates, there are approximately 1.1 thousand million smokers in the world, which represents about one-third of the global population aged 15 years and over. Of these, 800 million are in developing countries.

· Since the mid 1980s, estimated global cigarette consumption has remained relatively steady at about 1600 cigarettes per adult per year.

· Although life expectancy for both sexes is predicted to be on the rise, in many countries, the gap between them is growing significantly due to the larger number of men who smoke and die of tobacco-related diseases.

In certain regions, the health consequences of tobacco use are particularly devastating.

· In this region, smoking is likely to be a major factor underlying the 56% projected increase in male deaths from chronic disease between 1990 and 2020. In fact, the FSE region is projected in 2020 to have the highest adult male risk of death, even higher than that in sub-Saharan Africa.

· In absolute figures, the biggest and sharpest increases in disease burden are expected in India and China where the use of tobacco has grown most steeply. In China alone, where there are about 300 million smokers, and the cigarette consumption is estimated at around 1900 cigarettes per adult per year, around 50 million Chinese, who are now under 20 years of age, will eventually be killed by tobacco.

Health consequences of the tobacco epidemic in both developed and developing countries are devastating. By 2020, it is expected to kill more people than any single disease.

· Since the middle of the twentieth century, tobacco products have killed more than 60 million people in developed countries alone.

· Currently, tobacco is responsible for three and a half million deaths worldwide - or about 7% of all deaths - per year.

· Based on current trends, that figure is expected to grow to ten million deaths per year by the 2020s or early 2030s. It is estimated that half a billion people now alive will be killed by tobacco products.

· Tobacco is a known or probable cause of about 25 diseases, and the sheer scale of its impact on global disease burden is still not fully appreciated. For example, it is well known that tobacco is the most important cause of lung cancer. Less known is the fact that it kills even more people through many other diseases, including cancers at other sites, heart disease, stroke, emphysema and other chronic lung diseases.

· Studies in the United Kingdom have shown that smokers in their 30s and 40s are five times more likely to have a heart attack than non-smokers.

· On average, lifetime smokers have a 50% chance of dying from tobacco. And half of these will die in middle age, before age seventy, losing 22 years of normal life expectancy. In 1990, smoking was responsible for 35% of all male deaths occurring in middle age (age 35-69) in developed countries.

Tobacco dependence has been classified as a behavioral disorder in the WHO International Classification of Diseases (ICD-10).

· Tobacco dependence is caused by nicotine, which is contained in all tobacco products in substantial quantities and which has been internationally recognized as a drug of addiction

· Tobacco dependence is a real public health problem which warrants serious attention if the epidemic of tobacco-related mortality and morbidity is to be reduced.

· The revenues of the tobacco industry directly depend on the number of people addicted to smoking.

Environmental tobacco smoke (ETS) contains essentially all of the same carcinogens and toxic agents that are inhaled by the smoker. ETS is harmful to nonsmokers because it causes lung cancer and other diseases and aggravates allergies and asthma.

Smoking cessation has substantial health benefits and dramatically reduces the risk of most smoking-related diseases.

· One year after quitting, the risk of coronary heart disease (CHD) decreases by 50%, and within 15 years, the relative risk of dying from CHD for an ex-smoker approaches that of a long-time non-smoker.

· *Ten to fourteen years after smoking cessation, the risk of mortality from cancer decreases to nearly that of those who have never smoked.

· Quitting smoking benefits health no matter at what age one quits.

· Tobacco affects young people in an extraordinary number of ways. Due to environmental tobacco smoke (ETS) and maternal smoking, children's health may even be compromised from before the time they are born. In many countries, children may grow up in a haze of tobacco smoke, wreaking further havoc with their health.

· Household money that is spend on tobacco reduces the amount available for good, education and medical care. Children may also suffer the emotional pain and financial insecurity that comes for the loss of a parent or caretaker who dies an untimely death due to tobacco.

· On another level are the pervasive pressures for young people to use tobacco. People everywhere seem to be smoking. Attractive advertisements and exciting tobacco promotions are difficult to resist. Especially when the price is affordable, and it is not a problem for minors to buy tobacco.

· Even if the health risks are understood, the message that tobacco kills is not very relevant to young smokers, who believe themselves to be immortal. By the time they are ready to quit smoking, addiction has taken hold. These factors all contribute to the grim statistics. Based on current trends, about 250 million children alive in the world today will eventually be killed by tobacco.

· WHO believes that every child has the right to grow up without tobacco. This means without the rampant pressures to use tobacco, which in many countries emanates from all corners. There is a need to change the environment to one where non-smoking is considered normal social behaviour and where the choice not to smoke is the easier choice.

· get more coughs and colds and are more likely to suffer cute upper and lower respiratory tract infections. One study showed that children exposed to ETS during the first 18 months of life have a 60 per cent increase in the risk of developing lower respiratory illnesses such as croup, bronchitis, bronchiolitis and pneumonia.

· have an increased chance of developing asthma. If they already have asthma, second-hand smoke can bring on asthma attacks and make them worse.

· are at risk of impaired lung function, and may have breathing problems in the future.

· have an increased frequency of middle-ear infections, which can lead to reduced hearing.

· babies born to women who smoke during pregnancy, as well as those infants exposed to ETS have a significantly greater risk of dying of sudden infant death syndrome (SIDS).

The worldwide tobacco epidemic must be seriously addressed. Not only by Ministries of Health and WHO, but by all current and potential partners. Only through concerted efforts and by pulling all the available resources together, on a local, national and international level, will this looming public health catastrophe be averted.