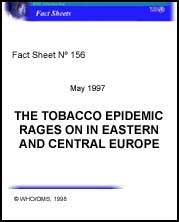 The Tobacco Epidemic Rages on in Eastern and Central Europe

* In the Former Socialist Economies of Europe (FSE), the figures are particularly startling. WHO estimates that in 1995, there were about 700,000 deaths in FSE countries caused by tobacco, or about 25% of the world total. Moreover, in marked contrast to the countries of Western Europe, where up to half of these deaths occur to people under age 70, 70% to 75% of these deaths were in middle age.

* Middle-aged men in Eastern Europe are twice as likely to die from a tobacco-related death than middle aged men in the western part of the region. In FSE countries, it is estimated that in 1995, 41% of all deaths among men aged 35-69 years were caused by tobacco.

* In these countries, smoking is likely to be a major factor underlying the 56% projected increase in male deaths from chronic disease between 1990 and 2020. In fact, the FSE region is projected in 2020 to have the highest adult male risk of death, even higher than in sub-Saharan Africa, largely due to the impact of tobacco.

* The chance of a 15 year old Central and Eastern European boy surviving until the age of 60 is only half that of a Western European boy, and worse than in many developing countries. It is predicted that in the year 2020, a boy in sub-Saharan Africa will even have a better chance of survival to the age of 60 than a boy in FSE. This dismal survival prospect is due largely to the high use of tobacco.

* In FSE, nearly every second premature death of a middle-aged man (35-69) and every fourteenth of a woman is the result of disease caused by tobacco.

* In these countries, men who die as a result of smoking-related diseases before the age 70 lose, on average, 21 years of life. In middle-aged men, nearly 60% of cancers and over 40% of deaths from CVD and as much as 85% of chronic obstructive lung disease (COLD) are a result of smoking.

* While the epidemic of tobacco-related diseases in Eastern European men, has already reached an unprecedented high level, further increases among women are expected during the next 20-40 years.

* In many FSE countries, smoking rates among men are particularly high, and in a number of countries these rates are greater than 50%. Among women, smoking prevalence, although more than 10 percentage points lower than that among men, is still greater than 20% and in some cases is as high as 30%.

* In the majority of FSE countries, cigarette use is increasing among young people, who, along with women, are the target groups of the tobacco industry.

Tobacco is detrimental to the economic health of FSE countries. Tobacco is a significant economic burden to individuals, families and societies, particularly from direct medical costs as well as lost productivity from increased illness and early death. These costs are especially detrimental to FSE countries undergoing economic transition.

* Countries of eastern Europe have come under particular attention from transnational tobacco companies, not just in terms of advertising and promotion, but also in terms of considerable investment in their tobacco manufacturing sectors. This development has generally taken place in a situation where new tobacco legislation has not yet been implemented. Compounding the problem for many of these countries has been a failure to regulate smuggling and collect taxes on all tobacco products.

* Although the vast majority of countries in Europe have some elements of a comprehensive tobacco control policy, many are experiencing difficulties in effectively implementing and enforcing such policies. There remains a lack of commitment and failure to implement effective policy. Some FSE countries have now established comprehensive legislative frameworks. However, such frameworks need to be put in place in all countries and be backed by effective enforcement.

* Due to the alarming trends in tobacco-related diseases in Central and Eastern Europe, WHO has focused particular attention on this region. In October 1995, a regional training seminar on strengthening tobacco control was held in Warsaw. Tobacco control consultations have already been held in a number of countries, and more are scheduled for the coming year. Progress has already been seen in countries where consultations have occurred.

* The WHO Tobacco-or-Health Collaborating Centre in Warsaw plays an active role in countries of Central and Eastern Europe. It has a key responsibility to promote the implementation of multi sectoral tobacco policies in these countries and to build alliances for a tobacco-free Europe. These types of alliances are a vital component in stemming the tobacco epidemic in Central and Eastern Europe and improving the health and welfare of its citizens.