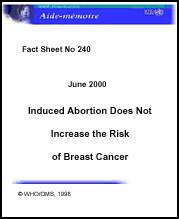 INDUCED ABORTION DOES NOT INCREASE THE RISK OF BREAST CANCER

Breast cancer: Cancer of the breast is common in developed countries where the lifetime risk ranges from 1 in 12 to 1 in 20 women. Among women living in developing countries the risk is lower but appears to be increasing. Risk factors for breast cancer include high socio-economic status, early menarche, late first birth, late menopause, and a family history of breast cancer.

Historical cohort studies, on the other hand, are more methodologically sound. Two major studies have been carried out using this methodology, and neither found an increased risk of breast cancer associated with first trimester abortion.

Therefore, results from epidemiological studies are reassuring in that they show no consistent effect of first trimester induced abortion upon a woman’s risk of breast cancer later in life.