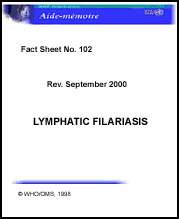 The thread-like, parasitic filarial worms Wuchereria bancrofti and Brugia malayi that cause lymphatic filariasis live almost exclusively in humans. These worms lodge in the lymphatic system, the network of nodes and vessels that maintain the delicate fluid balance between the tissues and blood and are an essential component for the body's immune defence system. They live for 4-6 years, producing millions of immature microfilariae (minute larvae) that circulate in the blood.

The disease is transmitted by mosquitoes that bite infected humans and pick up the microfilariae that develop, inside the mosquito, into the infective stage in a process that usually takes 7-21 days. The larvae then migrate to the mosquitoes' biting mouth-parts, ready to enter the punctured skin following the mosquito bite, thus completing the cycle.

Until very recently, diagnosing lymphatic filariasis had been extremely difficult, since parasites had to be detected microscopically in the blood, and in most parts of the world, the parasites have a "nocturnal periodicity" that restricts their appearance in the blood to only the hours around midnight. The new development of a very sensitive, very specific simple "card test" to detect circulating parasite antigens without the need for laboratory facilities and using only finger-prick blood droplets taken anytime of the day has completely transformed the approach to diagnosis. With this and other new diagnostic tools, it will now be possible both to improve our understanding of where the infection actually occurs and to monitor more easily the effectiveness of treatment and control programmes.

Communities where filariasis is endemic. The primary goal of treating the affected community is to eliminate microfilariae from the blood of infected individuals so that transmission of the infection by the mosquito can be interrupted. Recent studies have shown that single doses of diethylcarbamazine (DEC) have the same long-term (1-year) effect in decreasing microfilaraemia as the formerly-recommended 12-day regimens of DEC and, even more importantly, that the use of single doses of 2 drugs administered concurrently (optimally albendazole with DEC or ivermectin) is 99% effective in removing microfilariae from the blood for a full year after treatment. It is this level of treatment effectiveness that has made feasible the new efforts to eliminate lymphatic filariasis.

Treating the individual. Both albendazole and DEC have been shown to be effective in killing the adult-stage filarial parasites (necessary for complete cure of infection), but ideal treatment regimens still need to be defined. It is clear that this anti-parasite treatment can result in improvement of patients' elephantiasis and hydrocoele (especially in the early stages of disease), but the most significant treatment advance to alleviate the suffering of those with elephantiasis has come from recognizing that much of the progression in pathology results from bacterial and fungal "superinfection" of tissues with compromised lymphatic function caused by earlier filarial infection. Thus, rigorous hygiene to the affected limbs, with accompanying adjunctive measures to minimize infection and promote lymph flow, results both in a dramatic reduction in frequency of acute episodes of inflammation ("filarial fevers") and in an astonishing degree of improvement of the elephantiasis itself.