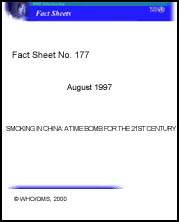 SMOKING IN CHINA: A TIME BOMB FOR THE 21ST CENTURY

China both spurs the imagination of the international tobacco industry and causes great concern among public health officials.

* In this country, there are currently about 300 million smokers, or about the same number as in all developed countries combined.

* The Chinese consume four times as many cigarettes as the next largest consumer, the United States of America.

Smoking prevalence: According to a 1996 national survey, 63% of Chinese men smoked, compared to only 4% of Chinese women. This compares to 61% of male and 7% of female smokers in 1984, when the first national survey was conducted.

* In 1996, the median starting age for men was 20 years, while women tended to start smoking, on average, at the age of 25. Compared to the 1984 survey, both men and women appear to be starting smoking some three years earlier.

* The 1996 survey indicates lower smoking prevalence among people with higher levels of education.

* In China, public awareness of the health hazards of smoking is still low, and the majority (83%) of smokers do not indicate an interest in quitting.

* Even if smoking prevalence remains unchanged, the absolute number of smokers will rise as the population increases from 1.2 billion to 1.5 billion by the year 2025.

* It is predicted that as disposable income further increases with economic development, cigarettes will become even more affordable, and that smoking among the young will increase.

* It is also expected that more girls will start to smoke, as Western style advertising promotes smoking as modern, glamorous, and liberating.

Health effects: The health consequences of smoking are already evident. The most common causes of death in China are already stroke, heart disease, cancer, and respiratory diseases. But because the Chinese population has not been smoking as heavily and for as long as the populations in the West, mortality will continue to increase well into the next century.

* There are currently around three-quarters of a million deaths each year in China caused by tobacco. Based on current trends, these figures will only get worse, and by 2020, around 2 million annual deaths are projected in China due to tobacco.

* Based on current trends, of all the children and young people under the age of 20 years alive today in China, 200 million will become smokers, and at least 50 million of these will eventually die prematurely because of tobacco use.

Economic Effects: While China earned US$ 4.9 billion in tax revenues from cigarette producers in 1993, the economic loss through smoking-related ill-health in the same year was US$7.8 billion, making a net loss of some US$2.9 billion.

Tobacco industry: China is the largest producer of tobacco in the world, producing four times as much tobacco as the next largest producer, the USA. The government monopoly, the China National Tobacco Corporation (CNTC), dominates the market.

* In 1993, CNTC sold 1700 billion cigarettes which amounts to 31% of the global market, or about the same market share as the three largest multinational tobacco companies combined.

* China is fast becoming a major exporter of tobacco. In 1995, export revenue was US$600 million, an astronomical increase from a negligible amount in 1980.

* In 1996, China collected more than US$10 billion in tobacco taxes, and tobacco is the largest industrial tax source.

China has not escaped the threat of unilateral trade sanctions related to tobacco. After a year-long investigation under Section 301 of the US Trade Act of 1974, and after the US formally threatened retaliatory tariffs on the US$3.9 billion worth of Chinese exports, China signed a Memorandum of Understanding with the USA in 1992.

* The transnational tobacco companies, active in China from the last century, left in the early 1950s. They have now returned, with joint venture factories and multifaceted cooperation agreements.

* Until 1994, in contrast to the national monopoly which undertook virtually no promotion, international cigarette brands were widely promoted in the Chinese media.

* Cigarettes are fairly inexpensive in China, with foreign cigarettes selling for around US$1.00 per packet of 20, and many local cigarettes at a much lower price.

* Cheap smuggled cigarettes also undermine government efforts to reduce smoking among the young. The Chinese government estimates that until very recently the country has been loosing some US$1.8 billion in revenue annually from rampant cigarette smuggling, mostly via Hong Kong.

* On World No-Tobacco Day (31 May), cigarettes are not allowed to be sold throughout China.

* A 1994 law bans tobacco advertising in the electronic and print media; tobacco smoking has been banned in many public places and from May 1997 on railway carriages, taxis, buses, subways, at airports and train stations, and on all flights of China's airlines.

* China's successful bid to host the 1997 World Conference on Tobacco or Health has given considerable impetus to tobacco control. Since the awarding of the conference to China became public knowledge in 1994, several new measures have been announced. For example, 300 cities will have regulations banning smoking in public places by the end of 1997.

As China undergoes rapid socioeconomic change, comprehensive and proactive tobacco prevention programmes are needed to ensure that impressive gains made by the country in reducing the burden of infectious diseases are not negated by the increasing health and financial costs of smoking. The present tobacco epidemic is a time bomb for the 21st century.