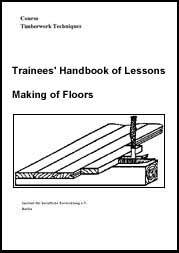 1. Task and Quality of Wooden Floors

Wooden floors are made from surfaced boards. These shall bridge the spaces between the floor beams or fillets. The surfaced boards form a self-contained horizontal surface which can be well walked on, receive loads and transmit them to the subconstruction.

Surfaced boards shall be of equal thickness, as far as possible of equal parallel width, free from knots and surfaced on one side. They consist of soft wood or hardwood suited for that purpose. They shall be 120 to 160 mm broad and - in surfaced condition - 20 to 24 mm thick. Wooden floors have little dead weight, are relatively elastic and foot-warm. On the other hand, they may be subject to deformation, because wood contracts and expands due to reception of moisture or drying. Wooden floors are easily inflammable, they rot under the influence of moisture and they are susceptible to destructive insects.

What disadvantages do wood floors have?

- Joint boarding
The boards are connected by straight or inclined joints.

Nailing is open (visible).
Joint boards are used in buildings of less importance.

Nailing is open.
Rebated boards are used in buildings of less importance, too.

- Tongued boarding
The boards get grooves on both longitudinal sides in which tongues from wood - hardwood is recommended - or flat irons are shoved.

Open nailing is preferred. Covered nailing is possible only in some cases. Tongued boarding can be used in buildings of less importance and in flats.

- Matched boarding
The boards are connected by tongue and groove joints.

This technique provides a solid and dense floor serving many purposes.
Open and covered nailing is possible.

Which kind of boarding is the most recommendable one?

For nailing surfaced boards countersunk head nails should be used. These nails are easier to flush with the surface of the wood. The length of the nails should amount to the triple thickness of the boards, approximately.

With open nailing - visible - each board is fixed by two nails on each beam.

For covered nailing only matched boarding is suited.

Here, one nail is driven obliquely in the groove and tongue.

With open, as well as with covered nailing the nails are not completely driven in. Otherwise there is the risk that the surface or, with covered nailing, the groove and tongue and the front edge of the boarding are damaged. The nails are allowed to project 1 to 2 mm; then they are driven in with the help of the nail punch. The hollows in the surface of the boards left by this technique can be puttied up.

When can the technique of covered nailing be used?

The following working means are employed:

- Auxiliary accessories
Trestles for supporting the boards, steel clamps for the boards, wedges and pieces of planks.

It is the task of the skirting boards to cover the strip between planed boards and walls. Furthermore, they shall protect the plaster of the walls, the wall paper or painting against damages that might be caused when the floor is cleaned.

Skirting boards are manufactured 40 to 80 mm high and 20 to 30 mm thick and with different profiles according to the requirements.

When the skirting boards are fixed, they are butt-joined with a mitre cut (normally 45°) in the reetrant and projecting corners as well as in longitudinal direction.

For these cuts a mitre box is used, which one can make by oneself.

Skirting boards up to 50 mm in height can be nailed on the deals or fixed on the wall with steel nails.

Skirting boards of more than 50 mm in height are fixed on the wall with steel nails or are screwed to previously set plugs or expansion dowels.

The cavities between the beams and/or supporting laths must be ventilated through holes in the cover strips. In rooms without basement good ventilation is absolutely necessary in order to avoid rot at all wooden parts.

How is the skirting board joined in an angular corner?

What must be provided for if there is no cellar under the floor?

What is the last operation after all deals are nailed?