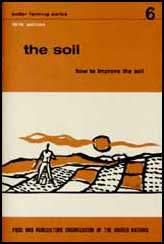 This manual is a translation and adaptation of "Le sol - comment amorer le sol?", published by the Agri- Service Afrique of the Institut africain pour le dloppement nomique et social (INADES), and forms part of a series. Grateful acknowledgement is made to the publishers for making available this text, which it is hoped will find widespread use at the intermediate level of agricultural education and training in English- speaking countries.

The original texts were prepared for an African environment and this is naturally reflected in the English version. However, It is expected that many of the manuals of the series - a list of which will be found on the inside front cover - will also be of value for training In many other parts of the world. Adaptations can be made to the text where necessary owing to different climatic and ecological conditions.

Applications for permission to issue this manual In other languages are welcomed. Such applications should be addressed to: Director, Publications Division, Food and Agriculture Organization of the United Nations, Via delle Terme di Caracalla, 00100 Rome, Italy.

The author of this English version Is Mr. A.J. Henderson, former Chief of the FAO Editorial Branch.