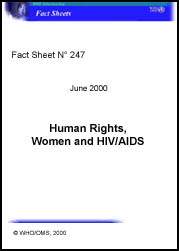 Women’s right to safe sexuality and to autonomy in all decisions relating to sexuality is respected almost nowhere.

As it is intimately related to economic independence, this right is most violated in those places where women exchange sex for survival as a way of life. And we are not talking about prostitution but rather a basic social and economic arrangement between the sexes which results on the one hand from poverty affecting men and women, and on the other hand, from male control over women’s lives in a context of poverty.

By and large, most men, however poor can choose when, with whom and with what protection if any, to have sex. Most women cannot.

As such, our basic premise has to be that unless and until the scope of human rights is fully extended to economic security (ie the right not to live in abject poverty in a world of immense riches), women’s right to safe sexuality is not going to be achieved.

A Minister of Health of one of the Southern African countries declared this year that women have a right to sexuality which does not endanger their lives. A guiding principle perhaps for all our work in HIV/AIDS/STI.

· Lack of control over own sexuality and sexual relationships (see above)

· Poor reproductive and sexual health, leading to serious morbidity and mortality. Rates of infection in young (15-19) women are between 5 and 6 times higher than in young men (recent studies in various African populations)

· Neglect of health needs, nutrition, medical care etc. Women’s access to care and support for HIV/AIDS is much delayed (if it arrives at all) and limited. Family resources nearly always devoted to caring for the man. Women, even when infected themselves, are providing all the care.

· All forms of coerced sex - from violent rape to cultural/economic obligations to have sex when it is not really wanted, increases risk of microlesions and therefore of STI/HIV infection.

· Harmful cultural practices: from genital mutilation to practices such as “dry” sex.

· Stigma and discrimination in relation to AIDS (and all STIs): much stronger against women who risk violence, abandonment, neglect (of health and material needs), destitution, ostracism from family and community. Furthermore, women, are often blamed for spread of disease, always seen as the “vector” even though the majority have been infected by only partner/husband.

· Adolescents: access to education for prevention, (in and out of school and through media campaigns), condoms, and reproductive health services before and after they are sexually active. Promotion and protection of adolescent reproductive rights (particularly girls). Ostacles in terms of laws and policies, health service provision, cultural attitudes and expectations of girls and boys’ sexual behaviour, cultural practices, and educational and employment opportunities.

· Sexual abuse: there is now evidence that this is an underestimated mode of transmission of HIV infection in children (even very small children). Adult men seek ever younger female partners (younger than 15 years of age) in order to avoid HIV infection, or if already infected, in order to be “cured”.

· Disclosure of status, partner notification, confidentiality. These are all more difficult issues for women than for men for the reasons discussed above - negative consequences; and the fact that women have usually been infected by their only partner/husband.

· Because disclosure is more difficult, women’s access to care and support is further decreased. VCT as an entry point for care and prevention is vital. Protection for women when they disclose status must be assured. We have this year worked intensively with UNAIDS on issues of disclosure and confidentiality. HSI produced a question and answer document which will be published shortly.

to testing during pregnancy,
to the intervention itself
to termination/continuing with the pregnancy

· Protection of confidentiality, including shared confidentiality in the interests of care and support; and the problem of not breastfeeding when this amounts to “public disclosure” of positive serostatus. Legal provisions, health service practices and community/NGO support.

· Involvement of partner/husband at all stages, positive and negative consequences.

· Women’s access to care and treatment apart from the MTCT intervention, woman as vessel for the baby.

· Generation of orphans. Parents likely to die. On mother’s death, baby’s survival chances much reduced. Should woman herself be treated, at least for common HIV related illness.

· Selection of women to benefit from MTCT.