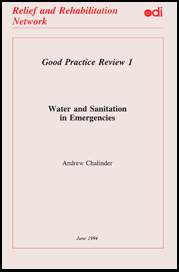 Operating in conflict areas imposes peculiar limitations on all sectors of an emergency programme. Interventions in the water and sanitation sector may place staff in particularly dangerous situations. For example, if a water source is some distance away from a refugee camp and people are working in relative isolation, they will be especially exposed. This applies particularly to local staff. If a water source is close to a frontier it will be open to interference, and staff manning the installation will be at risk. When surveying possible water sources, pipelines, etc., the possibility of mines should always be considered; infrastructure such as wells, pipelines and pump houses are commonly mined.

Populations may well be unstable and frequently on the move. Some means of coping with this has to be found. Intervention in the water sector will often result in rehabilitation operations; in these circumstances careful surveys of the actual work to be done should be undertaken (see Section 7.8). It is very important that agencies are seen to be non-partisan. Working with groups of people from one side of a conflict can be construed as a political statement and can place field workers in precarious circumstances. For example, an agency working on the rehabilitation of borehole supplies in Hargeissa, Somaliland in 1992 was perceived by local clan leaders to be working with an opposing clan. The result was that staff were placed in a highly dangerous position and one engineer was expelled from the country.

Conversely, working on water programmes in conflict zones can provide access to areas which are banned to other interventions. This may be because everyone needs water, or perhaps, because, unlike food or medical provisions such as drugs, the transport of water equipment into an area may not be perceived as being directly beneficial to an opposing military force. Drugs keep wounded soldiers alive and food feeds armies. In the Luwero Triangle, in Uganda in 1984, OXFAM which was operating only in the water sector, was able to continue its work uninterrupted by the government forces. Similarly, in Lebanon in 1982, OXFAM, again working only on water programmes, was permitted access to areas which were prohibited to other agencies2.

This gives rise to the question of the responsibility of agencies as witnesses. If an agency working on a water programme can access areas which are otherwise inaccessible, it will have an opportunity to monitor human rights issues. In such a situation, the agency and its staff will have wider obligations than just the provision of water.

Staff working in conflict situations will require good negotiating skills. It is likely that they will have to negotiate their way out of situations, into locations and around sensitive issues.