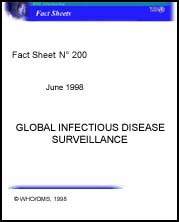 Increased movements of people, expansion of international trade in foodstuffs and medicinal biological products, social and environmental changes linked to urbanization, and deforestation are all manifestations of the rapidly-changing nature of the world we live in. Add to that the rapid adaptation of microorganisms, which has facilitated the return of old communicable diseases and the emergence of new ones, and the evolution of antimicrobial resistance, which means that curative treatments for a wide range of parasitic, bacterial and viral infections have become less effective, and a communicable disease in one country today is the concern of all.

During 1996, fatal yellow fever infections were imported into the United States and Switzerland by tourists who travelled to yellow fever endemic areas without having had yellow fever vaccination. During the same year approximately 10,000 reported cases of malaria were imported into the European Community, with one fourth of them reported from the United Kingdom. When cholera re-entered Peru in 1991, after a long absence, it found an opportunity to spread through the existing sanitation and water systems, causing over 3 000 deaths. Seafood exports were embargoed from Peru and tourism decreased, costing an estimated loss of at least US$770 million to the Peruvian economy in one year.

One of the major means of addressing the concerns about communicable diseases in both industrialized and developing countries is through the development of strong surveillance systems. However, in view of the disparity among national surveillance systems, partnerships in global surveillance are a logical starting point in this area of common commitment.

WHO's role in disease surveillance

Since 1992, alarm over emerging and re-emerging diseases has resulted in a number of national and international initiatives to restore and improve surveillance and control of communicable diseases. The Member States of the World Health Organization (WHO) expressed their concern in a resolution of the World Health Assembly in 1995, urging all Member States to strengthen surveillance for infectious diseases in order to promptly detect re-emerging diseases and identify new infectious diseases. The World Health Assembly recognized that the success of this resolution depends on the ability to obtain information on infectious diseases and the willingness to communicate this information nationally and internationally. Improved detection and surveillance, moreover, will lead to better prioritizing of public health efforts.

One of WHO's main means of creating a global surveillance system has been the development of a "network of networks" which links together existing local, regional, national and international networks of laboratories and medical centres into a super surveillance network. This network is being constructed together with the 191 WHO Member States and other partners, including the European Union-United States Task Force on Emerging Communicable Diseases and the US-Japan Common Agenda; the network has also been cited as an area of collaboration by the G-7/G-8 member countries at both the Lyon (1996) and the Denver (1997) Summit Meetings. Requirements for monitoring the intentional use of pathogenic microbes have also been addressed by the network, specifically in the revision of the International Health Regulations (IHR), and in collaboration with the ad hoc Group of States Parties to the Biological Weapons Convention.

Government and university centres of excellence in communicable diseases such as the US Centers for Disease Control and Prevention, the UK Public Health Laboratory Service, the French Pasteur Institutes, the global network of schools of public health and the Training in Epidemiology and Public Health Intervention Network (TEPHINET) provide confirmed reports of communicable diseases. Most of these sites are or will become part of the WHO Collaborating Centre network. This network, along with the WHO Regional Offices, WHO country representatives and other WHO and UNAIDS reporting sites, contributes to global surveillance along with reporting networks of other United Nations agencies such as UNHCR and UNICEF. International military networks such as the US Department of Defense Global Emerging Infections System (DoD-GEIS), private clinics, individual scientists and public health practitioners complete the network of formal information sources.

There are geographic and population gaps, as well as deficiencies in expertise in these networks, which must be rectified. As most of these networks represent the public sector, they should develop means of including the private sector, as well as other sources of valid information such as military and research laboratories. They need to represent both human and animal infections and provide information on antimicrobial resistance and the environment including water, insect vectors and animal reservoirs.

The rapid global reach in telecommunications, media and Internet access has created an information society permitting public health professionals to communicate more effectively. Many groups, including health professionals, nongovernmental organizations and the general public, now have access to reports on disease outbreaks, challenging national disease surveillance authorities which were once the sole source of such information. Public Internet sites are dedicated to disease news and include medicine and biology-related sites as well as those of the major news agencies and wire services. ProMed, an early electronic discussion site on communicable diseases occurrence on the Internet, provides an example.

Electronic discussion sites, accessible through free and unrestricted subscription, are valuable sources of information. Their scope may be worldwide (ProMed, TravelMed), regional (PACNET in the Pacific region) or national (Sentiweb in France). They exemplify unprecedented potential for increasing public awareness on public health issues.

The Global Public Health Information Network (GPHIN) is a second generation electronic surveillance system developed and maintained by Health Canada. It has powerful search engines that actively trawl the World Wide Web looking for reports of communicable diseases and communicable disease syndromes in electronic discussion groups, on news wires and elsewhere on the Web. GPHIN has begun to search in English and French and will eventually expand to all official languages of the World Health Organization, to which it has created close links for verification.

The International Health Regulations (IHR) are a legal instrument which requires WHO Member States to notify diseases of international importance: currently plague, cholera and yellow fever. Countries have not uniformly complied with disease notification, often fearing unwarranted reactions that affect travel and trade. In addition, the official international reporting mechanism has not evolved with the new communications environment, and does not include many communicable diseases of importance to international public health. A revision of the IHR is therefore being directed towards a stronger role in global communicable disease surveillance and control. The revised IHR emphasize the immediate notification of all disease outbreaks of urgent international importance. This concept is currently being evaluated in a pilot study in 21 countries. Electronic reporting of specific clinical syndromes, which were developed taking into account those diseases of importance to public health, will help countries report immediately. This will facilitate rapid alert and appropriate international response while awaiting laboratory verification. Once the confirmed diagnosis is known it will also feed into the system, permitting any adjustments to the international response which may be necessary. When the revision is complete, the IHR will constitute an important public health tool.

Influenza surveillance is one of the most developed global surveillance and monitoring systems of WHO. It started in 1948 and has developed over the years into a highly successful global partnership. The network now involves 110 collaborating laboratories in 82 countries, constantly monitoring locally isolated influenza viruses and providing information on true emergence and spread of different strains.

National case detection systems and laboratories have been strengthened by WHO and its partners using internationally accepted norms, and virus isolates from the national laboratories are analysed in more detail in one of the four WHO Collaborating Centres for Influenza. The data are then used by experts associated with the surveillance system to make recommendations on the three virus strains to be included in the next season's influenza vaccine. Thus, information generated from global surveillance results in an important and unified public health response each year. The annual design of the vaccine also represents an outstandingly successful collaboration between the public and private sectors.

In parallel to the surveillance programme, national and global pandemic plans are being developed to systematically address the next influenza pandemic. Both the surveillance system and the elements of the global pandemic plan were tested during the outbreak of the avian influenza A(H5N1) virus in human subjects in Hong Kong in late 1997. The rapid identification of the virus strain in one of the collaborating laboratories in the Netherlands, followed by the mobilization and coordination of an investigating team from WHO Collaborating Centres in the United States, extensive epidemiological and laboratory studies, the prompt dissemination of public information, the development of diagnostic test kits for international distribution, and the identification of a virus line suitable for vaccine development all contributed to a timely, ordered and effective response to the outbreak.

WHO's epidemic preparedness and response

Once a communicable disease outbreak has been confirmed, pertinent information is placed on the World Wide Web and can be accessed by the general public (http://www.who.ch/emc/outbreak_news/). At the same time, an international response, with the input of technical and humanitarian partners, is mounted if required. A WHO team arrives on site within 24 hours of outbreak confirmation to make an initial assessment and begin immediate control measures and prepare the ground for the larger international response if needed. By linking the international response to systematic global surveillance, a worldwide "network of networks" is available from which to solicit support, thus ensuring that no one country, technical or humanitarian partner must bear the entire burden.