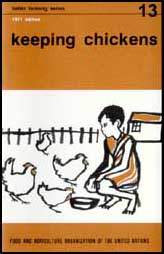 1. Small livestock farming is common in villages all over the world. Everywhere you see around the houses numbers of sheep, ducks, pigs, and above all chickens.

2. The villagers raise all these animals in order to have meat on feast days - for the arrival and departure of visitors, for sacrifices, marriages, births and funerals. And certain families have even got Into the habit of eating meat fairly often and, for instance, giving eggs to their children.

Small livestock farming is a way to build up reserves of food and money.

4. Not much trouble is taken about feeding these animals. The animals find their food by scavenging among the houses of the village.

They get what is left over from the harvest and from people's food.

5. Not much trouble is taken about watering these animals.

Very often they do not get enough to drink, or they get dirty water that gives them diseases.

6. Not much trouble is taken about housing these animals.

They are not put in an enclosure or under a shelter to protect them against wind and rain, and to guard them against thieves.

Animals that are not kept in an enclosure go into the houses and into the fields and damage everything.

7. Many animals are small

Animals that are not of a good breed and are poorly fed do not grow well.

They do not yield much meat.

You cannot sell them at a good price.

8. Many animals are sick
Animals that run about everywhere catch diseases.

When a hen has a contagious disease all the hens in the village get it.

A sick animal does not grow well, and it often dies.

Diseases, predators, and lack of care and food kill many chicks.

10. Very often out of 15 chicks that are hatched there remains at the end of a year only one sound chicken. The others - 14 out of 15 - are either dead or sick or too small.

11. They yield little meat for the villagers ...

Very often the animals, even those more than two years old, remain small and yield very little meat. So that on feast days and at funerals, for instance, a lot of animals have to be killed to get enough meat.

The country has to buy abroad good meat to feed the people in the towns.

So it loves a lot of money.

The money used to buy meat abroad cannot be used to make roads, build schools, or pay for nurses and medicines.

Enough good meat must be produced so that the country does not have to buy it abroad.

The hens and chickens are too small to be sold at a good price.

All the chickens that are dead or sick have been fed for nothing.

All the remains of food or of the harvest eaten by these animals have brought the farmer nothing.

The farmer has spent very little, but he has not earned all the money that he might get with his livestock.

Chicken farming must be improved

14. Hens can be much better fed and much better looked after without the farmer spending much money.

15. As it is, in many villages you see hens of a good breed, that are well- fleshed, resist diseases well, yield a lot of meat and many big eggs.

16. Near the towns, there are even large poultry farms that produce eggs and chickens to be sold to the people in these towns.

These are industrial farms.

In this booklet we are speaking especially about raising poultry at home.

When raising poultry at home:

17. These services are trying to find out:

· what are the breeds that yield more, that are more resistant to heat, dampness and diseases;
· what food to give these good breeds;
· what vaccinations protect poultry from diseases.

They also sell cocks, hens and chicks of good breeds.

19. Assistants of these centres and services should:

· have a good knowledge of traditional livestock farming; and observe carefully what farmers are doing, so as to advise them better;

· win the confidence of farmers so that the advice is listened to and followed;

· have a good knowledge of the modern way of livestock farming so as to produce more.

The work of the assistants Is also very Important.

A mother bird is called a hen. Their little ones are called chicks.

When the chicks have grown big enough to be sold, they are called chickens. All the birds in the poultry house (cocks, hens, chicks and chickens) are called poultry.

To succeed in keeping poultry, you must:

A family poultry unit should not cost much, but It should yield a lot