A team of public health specialists should design diagnostic and therapeutic flowcharts for use at the national level. Key people to involve in the design are the coordinators of national programs, including STD/AIDS control, primary health care, essential drug, family planning, and maternal and child health. In some situations, it is advisable to ask specialists, such as gynecologists, microbiologists, genito-urinary specialists and pharmacists, to participate. The involvement of these specialties can help to ensure their cooperation and increase the acceptance of the flowcharts.

In order to ensure that as many patients as possible receive correct diagnoses, background information on local etiologies of STD syndromes, including mixed etiologies, is essential in designing an STD management flowchart. Data on validity and cost-effectiveness can be obtained from the literature or from special studies. Decisions on the most cost-effective treatments must be based on local or regional antimicrobial susceptibility patterns, results of treatment trials, toxicity data and the cost of the drugs.

To ensure efficient management of STDs, flowcharts should be adapted to the level of development of the health services. Feasibility is determined by the presence of laboratory facilities; the infrastructure available for physical examination (availability of an examination room with privacy, examination table, adequate specula, gloves and light source, and facilities to disinfect specula regularly); the level of training of personnel (ability to perform a speculum examination); access to a higher-level health care facility for referrals; the drugs available in health care facilities; and the staff time available per patient.

Local and cultural perceptions about STDs and health-seeking behavior will, to a large extent, determine the usefulness of certain flowcharts. For example, when designing a flowchart, it is important to consider whether a genital examination by a health care worker of the opposite sex is culturally acceptable. 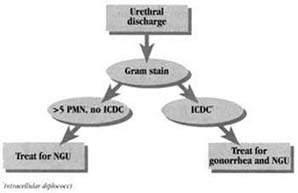 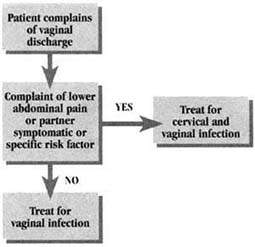 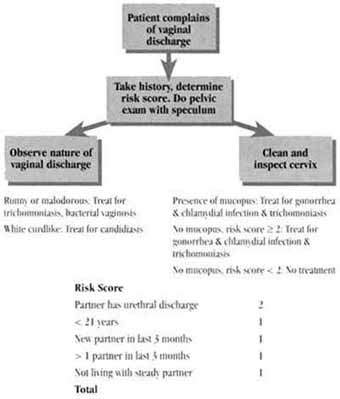 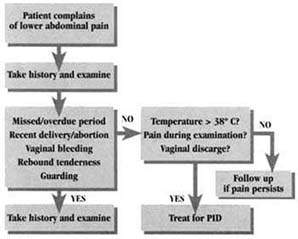 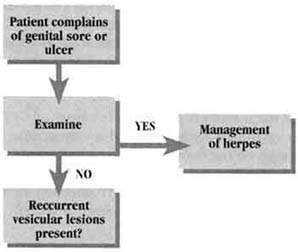 Validity Testing of a Flowchart: Sensitivity and Specificity

Work is ongoing on the identification, development, and use of simple tests that could improve the sensitivity and specificity of syndromic diagnosis, including simple, rapid tests to identify oxidase-producing organisms (e.g. gonococci) in urethral discharge and tests to detect leukocytes in cervical and urethral specimens which would be suggestive of chlamydial and/or gonococcal infections.

The study population for validity testing has to be as representative as possible of the population in which a flowchart will be used. As long as enough STD patients are consulted to reach the necessary sample size within a reasonable time and a reference laboratory is available for the gold standard tests, a primary health care setting is suitable. In general, sophisticated laboratory tests are needed for gold standard diagnosis. If some patients consulting at the primary health care level have already taken drugs, it is important not to exclude them from the validity study.

When testing the validity of flowcharts, it is preferable to have two examination rooms. In one room, a health care worker can follow the directives of the flowchart and make a therapeutic decision. Then the patient can be asked to enter a second room, where a more systematic examination can be done and where specimens will be taken for the gold standard laboratory tests. Since a speculum examination is sometimes not included in STD flowcharts, using such a setting will ensure that the therapeutic decision is not based on the findings of the speculum examination.

The likely outcomes of diagnoses made using a flowchart can be simulated retrospectively using data from history taking, physical examination and laboratory tests. This desk exercise can be very useful for evaluating modifications to flowcharts without repeating studies. For example, it could be used to assess what would happen to the specificity of a flowchart if the gram stain examination were omitted.