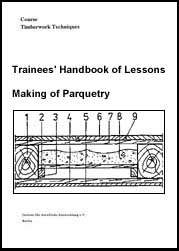 1. Purpose and Importance of Parquet Floor

Parquetry belongs to the category of floor covering, like, for instance, planed boarding, plastic coverings, fleximer flooring and ceramic flooring.

It is the immediately utilized layer of the floor. The selection of the flooring to be laid is determined by the various demands the future use of the floor will make. The most important requirements on floorings and the qualities of parquetry are mentioned below:

(Compressive and flexural strength as well as wear resistance)

In this respect, parquetry shows the best properties and greatest resistance to wear. Its service life, for example in a living-room, hotel room or office lasts for more than 60 years.

Physical demands as to construction engineering

Here, too, parquetry proves to be the best possible solution, with its properties, as a rule, being far better than those of any other types of flooring, except moisture protection.

(Time of manufacture, time of drying, period of time till the floor can be used)

Here the properties of parquetry are unfavourable. Parquet laying requires a complicated sequence of operations:

It must be prepared on special machines, and the laying and entire trimming of it again requires much time. Another and rather long period must pass till the floor can be used. This waiting period is longer than with other types of flooring.

(Parquetry is the most expensive flooring as to material and manufacture)

The wood used for this purpose must meet great requirements with respect to strength and aesthetical qualities.

Premanufacture as well as laying require much time and labour.

(Appearance, total easthetical effect on the design of the room)

Here, parquetry meets highest standards. By suitable patterns and selected kinds of wood, parquet floor can have and excellent effect on the design and atmosphere of a room.

Fields of application of parquetry

Parquetry may be used in housing and social construction as well as in industrial building, for instance in

What are the essential qualities of parquet floor?

How long does the service life of a parquet floor last with normal utilization?

The below mentioned tools relate to the laying of premanufactured parquetry only.

The following working means are required for laying different kinds of parquet floors:

Tools for preparing the subfloor, as well as for applying the adhesive and the sealer coat