Motivating volunteers is one of the most difficult tasks in community-based health initiatives. IMAU’s AIDS education programme draws on the talent of people who are already volunteering - Imams, County Sheikhs, District Khadis, and other religious leaders. The project motivates religious leaders and their volunteer assistants to become AIDS educators by appealing to a sense of shared responsibility for an issue critical to public health. The project also establishes ties between teachings from the Qur’an and behaviour that reduces the risk of HIV infection.

As further incentive, each mosque team, or other institution as in the case of Kampala, is given a shared mode of transport (one bicycle) and the means to start a small Income-Generating Activity. Supportive supervision by IMAU officials is also used as an effective motivator for volunteers.

IGAs are a popular component of the FAEPTI Project. IMAU believes that Increasing individual and family income is an important factor in reducing the likelihood of HIV infection. Families with higher incomes are more likely to educate their children. Their children, in turn, are more likely to find gainful employment and understand the dangers of high-risk behaviour. Lack of meaningful activity is often cited as a condition that puts young people at risk for AIDS.

At the beginning of the project volunteers were given money to buy two hens. This was later modified and each was given two female goats. In many cases the hens and goats multiplied to benefit the volunteers effectively. Other IGSs were started from the sales of the multiplied goats and hens. 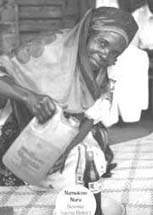 “We have planted asunflower garden for ourbees. We have five hives and can collect four litres of honey, per hive, every six months.”

“I have been married for 14 years. I am the only wife of Ali Kintu. We have four children. I started selling heaps of rocks in 1995 when our women’s group encouraged us to take up brick laying and stone crushing. I took up stone crushing because it was less time-consuming. I use the income I earn to supplement what I make selling vegetables from my garden.

I get the stones from my father-in-law’s garden, near our house. Working part-time, it takes me about three weeks to make twenty heaps of stones. I start working in the afternoon when I get back from gardening. I break the stones while Iprepare lunch and then I return to my garden. Each heap sells for 1,500/ = (U.S. $l.50). The first stones I made were used to build our house. Later I sold stones to build the nearby school.”

“We all contribute to the project. It needs a lot of energy, not a lot of money. We started by making bricks for the mosque. Now we have seven stacks of fired bricks - 3,500 altogether. There are eight women in our group. They fetch the water, make the mix, and collect banana leaves for shade. I am one of two men in our group. We form the bricks using a frame, then stack them. People buy our bricks locally.” 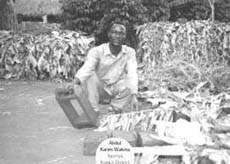 “Income generation is not simply an economic issue. It is part and parcel of the strategy for fighting against HIV and AIDS. That is why we use HIV/AIDS as an entry point into the whole area of development.”

“Poverty fuels AIDS and AIDS brings poverty. If we are to fight AIDS we must develop our communities.”