There is an important link between a woman’s ability to make choices about her life and her susceptibility to HIV infection. Women participating in IMAU’s AIDS education projects say that they have learned self-respect and this helps them avoid high-risk behaviour. They also say that having their own source of income has made it easier to stand up for themselves, in the face of an unfaithful husband.

It is a custom in many Muslim homes, particularly in the villages, that women are not supposed to work outside the home. IMAU’s focus on educating women and encouraging their Income-Generating Activities met initial resistance. As time passed, more conservative community members saw that progress for women meant progress for everybody.

IMAU involves women at every level of its AIDS education activities. The Imam is required to have a female as well as a male assistant, and Family AIDS Workers (FAWs) are comprised of equal numbers of men and women.

Project staff agree that it is the women volunteers who are the most interested and effective participants. Female FAWs find that women in their communities are willing to confide in them important issues regarding HIV/AIDS that they would never raise with their husband or the Imam.

Female FAWs also play a critical role in reaching out to and educating teenage girls, who in Uganda are considerably more likely to be infected with HIV than boys their own age. (The numbers balance out between the sexes as they grow older.)

Encouraging the formation of women’s groups and offering incentives for IGAs is at the heart of IMAU’s efforts to empower local women. Many women say that their IGAs keep them from looking outside their marriages for other partners to contribute to expenses, such as school fees. They also say that if they are financially dependent on their husbands, they fear standing up to him because he may throw them out, leaving them destitute. This is one reason why women who suspect that their husbands have been unfaithful do not refuse his advances or insist he wear a condom.

“I am my husband’s fourth wife. We have been married for 21 years and have 6 children.

AIDS is a big problem in our community. I have seen both men and women suffering. I became active in fighting this disease when IMAU came and heard that there was an educated woman hiding some-where in the village.

First I was trained as a Family AIDS Worker, then I was nominated to become an Assistant County Khadi for the project. Now I am a Supervisor.

I do very many things. I move from house-to-house and teach people in the villages - men, women, and children - about how AIDS is spread.

Our people are happy to learn because they think Muslim knowledge on HIV is lagging behind other religious groups.

The most rewarding part is seeing the women in our community coming together to address the problem. Previously, we were always at home. Now we form women’s groups, making mats, growing vegetables, breaking rocks, laying bricks, and making stoves for extra income.

Being together we develop self-respect and a measure of financial independence, which helps protect our families from HIV infection.” 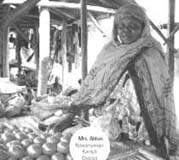 I have eight children. My husband is a retired police officer.

I was the first Muslim woman to have a stall at our local market. This was in 1996. People disapproved, but in time they got used to it. Now there are five Muslim women selling at the market.

In the beginning, my husband did not support the idea. But he listened to IMAU’s teachings and thought it would be a good idea for me to contribute to our family’s income. My earnings from the market pay school fees and buy things for our home.

I feel strong now and when people see me pass they talk about me with respect.

My wife told me she wanted to open a stall at the market. I thought about it for three days then agreed it was agood idea.

Some people became my enemies. They thought this would be my downfall. Others envied me. As time passed, everyone could see the benefit.

We wake early in the morning and do the gardening together. People thought the garden would grow bushy, but it hasn’t.

Things are changing. It is high time we changed too. We don’t have to do what our ancestors did. A husband and wife can both work together to support the family. We can share the burden.