The Islamic Medical Association of Uganda (IMAU) believes that if AIDS education efforts are to reach our Muslim communities, they must involve our religious leaders. We have worked with this understanding since 1992 to train and supervise over 8,000 religious leaders and their teams of volunteers. These spiritually motivated community members have made repeated home visits to over 100,000 families in 11 districts across Uganda, offering accurate information on HIV/AIDS and motivation for behaviour change.

After only two years, baseline and follow-up surveys revealed that community members in IMAU project areas showed significant increases in correct knowledge of HIV transmission and prevention, as well as increased knowledge of risk associated with the Muslim practices of ablution of the dead and (when unsterile instruments are used) circumcision. The surveys also show a significant reduction in self-reported sexual partners and an increase in self-reported condom use.

The key to our success has been our ability to mobilize Muslim leaders - Imams, County Sheikhs District Kadhis, and His Eminence the Mufti, who in 1989 showed support for our mission by declaring a Jihad on AIDS. 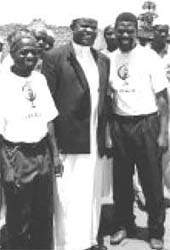 Our Association of over 300 Islamic medical practitioners is well respected and Muslim leaders take our advice to heart. We are conversant in the teachings of Islam and are able to quote verses from the Qur’an to make scientific explanations of HIV relevant to our people. Although IMAU does not offer material support or clinical services to families suffering with AIDS, we help communities network with other organizations that do offer these services.

Our continued progress is critical as it is now estimated that one in every ten Ugandan adults is HIV positive.

IMAU’s AIDS education programmes focus on Uganda’s Muslim communities but also extend to people of other religious faiths. As one Imam said: “We all suffer the same.”

This booklet has been produced for readers in Uganda and Muslim communities in other parts of the world who may be interested in learning more about IMAU’s community-based health efforts.