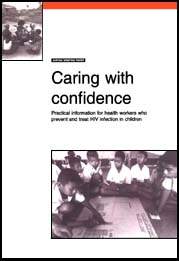 HIV stands for Human Immunodeficiency Virus. The virus attacks the body's immune system, which protects against illness. The virus can only live inside a living human body. It only survives for a short time outside the body.

Once infected, an adult or a child is infected for life and there is currently no cure. But, children with HIV infection can remain healthy for several years, especially if they have access to good nutrition, treatment and care. Some children with HIV are still alive and well at the age of 15 or 16.

Other children with HIV may have periods of being well and periods of being ill. As HIV progresses and attacks the immune system the body is less able to fight off infection, and those infected suffer from HIV-related illnesses.

AIDS stands for Acquired Immune Deficiency Syndrome. Acquired means to get. Immune means protected. Deficiency means a lack of. Syndrome means a group of different signs of a disease.

Adults and children with AIDS have serious illnesses and infections, usually after they have had HIV infection for some time and the virus has destroyed the immune system's ability to protect the body against disease.

How is HIV transmitted?

HIV is found in blood, semen, vaginal fluid and breastmilk. The virus can be transmitted through:

· Pregnancy, birth or breastfeeding, if the mother is infected with HIV.

How is HIV not transmitted?

· HIV is not transmitted through saliva, tears, vomit, faeces or urine, although small amounts of the virus have been found in these.

· HIV is not passed through unbroken skin, which forms an effective barrier.

· HIV is not spread through casual day to day contact such as touching someone with HIV or something they have used, sharing the same toilet seat or washing water.

· Nursing or caring for someone with HIV is not risky provided that sensible precautions are followed, such as disposing of sharp needles carefully and keeping cuts covered.

· HIV is not transmitted by mosquitoes.

· HIV is not transmitted to or from an infant or young child by cuddling, bathing, feeding or playing.