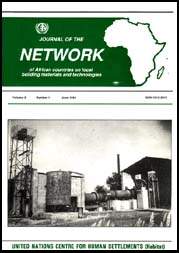 In Africa, the importance of rural service centres cannot be overemphasized. The majority of the population of most African countries is still rural, and most of them are directly depended on agriculture for their livelihoods. In addition, most African nations depend on agriculture for most of their export earnings. Clearly, rural service centre planning and management is an important subject which deserves greater attention than it has hitherto been accorded.

The specific objectives of this study are:

(a) To examine existing national policy frameworks within which rural service centres are developed, and the extent to which these centres have been able to provide the services required by their rural hinterlands, including: commercial (retail, banking, agricultural inputs etc.); administrative (extension, community training etc.); transport and marketing; rural industry and employment;

(b) To examine the ways (both conventional and alternative) in which rural service centres are currently being managed, including the roles of the public sector, the private sector, non-governmental organizations, community-based organizations and individuals.

Human settlements issues in Africa are closely linked to various factors such as increasing population, decreasing per capita income, rapid urbanization, displacement on account of political reasons, and an unfavourable world economic order.

Sub-Saharan Africa’s population of 450 million in 1990 is twice its population in 1965 and more than five times that at the beginning of the century. With a growth rate of around 3 per cent annually, its population is projected to reach 1.1 billion by the year 2015. The implications of this rapid upward trend in population growth are enormous.

During the next 30 years the rates of entry into the labour force will double and land-to-people ratios, already a constraint on agricultural development, will worsen. This exceptional demographic surge will be accompanied by massive pressures for migration. Most of the migrants will settle in the expanding urban centres, leading to the proliferation of large cities.

In 1960, there were only two cities in sub-Saharan Africa with over 500,000 inhabitants, but 20 years later there were 14 such cities. By the year 2000 there will be over 20 cities with more than 1 million inhabitants. Lagos will have a population of 8.3 million, Kinshasa 8 million and Jos 7.7 million, while Nairobi, Dar es Salaam, Khartoum and Addis Ababa will all be over 4 million. The urban population is expected to grow from 129 million in 1980 to over 765 million by the year 2020 by which time more than 50 per cent of the region’s population will be living in urban centres.

This publication is a compilation of summaries of UNCHS (Habitat)’s main technical co-operation activities in the region which covers 19 countries. Considering the weaknesses of local-level governments and the absence of appropriate national housing strategies, the technical assistance to sub-Saharan African countries by UNCHS (Habitat) focuses mainly on two priority areas: improvement of urban management, and formulation and implementation of national housing strategies.

In its effort to promote low-cost construction techniques, UNCHS (Habitat) has for several years been advocating the use of alternative binders. Notable among these are natural and artificial pozzolanas which can be used as an admixture to both lime and cement. Many African countries are endowed with natural pozzolanas such as volcanic ash which, together with locally-produced lime, can produce an excellent low-cost binder suitable for most house-building applications. Similarly, artificial pozzolanas, derived from agricultural and industrial residues, can not only be substituted for Portland cement in many applications, but can minimize certain environmental problems as well. Countries such as China, India, Malaysia and Thailand, produce millions of tons of fly-ash annually in their coal-fired power stations. Many South and East Asian countries also produce large quantities of rice husk from paddy processing. Their conversion into useful binders could help in disposing of these wastes in an environmentally sound manner.

Cementitious binders, such as Portland cement, lime, lime-pozzolana, and gypsum, are essential building materials for the construction industry, in general and for low-cost housing, in particular. Among all the binding materials, Portland cement, because of its versatility, remains the most popular with the builders. However, the experience of the past two decades or so has shown that in the context of low-cost house construction in most developing countries the increasing demand for binding materials cannot be satisfied by relying on Portland cement. In fact, it is not uncommon to see in many cities and towns in developing countries a large number of partially-built structures the completion of which is delayed because of the scarcity of Portland cement or a sudden increase in its price.

The consumption of Portland cement in most developing countries has increased rapidly over the past two decades with an attendant increase of imports. Despite increased imports and the expansion of domestic production, Portland cement is still not available in sufficient quantities and its price remains beyond the reach of the majority of the population. The main reasons for this scarcity are: the low capacity utilization of large-scale imported plants; constraints in the availability of spare parts; and distribution problems.

This publication has been produced in an attempt to fill this gap by compiling a number of case studies on achievements and constraints which are faced in producing alternative binders such as lime and pozzolanas. Efforts have been made to describe not only the technical features of production, but also the non-technical aspects of development such as the methods applied for the acquisition and development of technologies, problems encountered and how they were solved.

In view of the limited technological capacities of African countries and the relevance and cost-effectiveness of regional cooperation for transfer and diffusion of technologies, most case studies are selected from African countries to stimulate other countries in that region to benefit from them. Additionally, a case study on lime from India has also been included to demonstrate the scale-effect of lime production.

Directory of non-governmental organizations in the field of Human Settlements

In recent years, there has been increased recognition of the contribution of non-governmental organizations (NGOs) to the development and management of human settlements. The adoption of the Global Strategy for Shelter to the Year 2000 by the General Assembly of the United Nations has enhanced the role of the non-governmental sector in the provision and improvement of shelter and services, particularly to the poor and disadvantaged. More and more governments are adopting the enabling strategies urged by the Global Strategy in their national shelter strategies and this is facilitating the activities of NGOs, community-based organizations (CBOs), housing cooperatives and others involved in various aspects of human settlements. Furthermore, the adoption of Agenda 21 by the United Nations Conference on Environment and Development (UNCED) has given impetus to the non-governmental sector to strengthen its role in the sustainable development of human settlements.

This Directory has been compiled in cooperation with Habitat International Coalition (HIC), the umbrella body of NGOs working on human settlements issues, as well as a large number of NGOs and CBOs who participated in the questionnaire survey undertaken by UNCHS (Habitat) to develop its NGO database. In spite of the wide cooperation, this first Directory of Non-governmental Organizations in the Field of Human Settlements should not be considered as a complete coverage of all NGOs active in the human settlements field. It is hoped that it will encourage those not included to provide relevant information so that they may be included in the UNCHS (Habitat) NGO database.

Although far from complete, this directory aims at filling a gap that has been felt in recent years as a result of growing interest in involving NGOs in the development process at the international, regional, national and local levels. It is hoped that it will also facilitate cooperation between the governmental and non-governmental sectors in the improvement of human settlements.