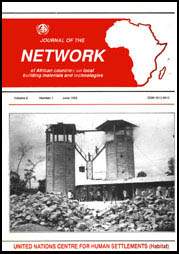 This paper was presented to the Seminar on Local Materials for Housing, Third International Seminar of the African Network of Scientific and Technological Institutions (ANSTI), Civil Engineering Subnetwork, held at the University of Mauritius, Reduit, March 1990. ANSTI is a UNESCO-sponsored Network

The paper is aimed at introducing new entrants into researches on pozzolanas. Reference is made to the past efforts of the industrial countries in research work leading to the development and commercialization of local pozzolanas in their environs, and how Africa, albeit having abundant potential for pozzolanas, has not yet succeeded in making effective use of the only known cheap alternative to Portland cement. The paper enumerates the physical and chemical characteristics of a presumed pozzolanic material. It gives the state-of-the-art of research methods in the area of pozzolanic materials without utilizing sophisticated laboratory equipment. With the help of the test results, new methods for the physical and the chemical combination of pozzolanas, to produce the best blend, are introduced. The methods could be used in laboratories and industry, especially when there is need to improve pozzolanic activity or produce blended cement. Emphasis is laid on the need for African Governments to persuade the existing Portland cement factories in Africa to undertake pozzolana production as a new line. The examples of Rwanda and the United Republic of Tanzania are highlighted with a view to encouraging other African countries to adopt the experiences of developed countries in the production of pozzolana as an alternative to Portland cement for masonry work.

Pozzolana is a natural or artificial material which contains silica and alumina or ferruginous materials in a reactive form. The natural pozzolanas are of volcanic origin, such as volcanic ashes, tuffs and other diatomaceous earths, and agricultural and mine wastes. Pozzolanic materials are not cementitious in themselves but, when finely ground, contain some properties which at ordinary temperatures will combine with lime and shale in the presence of water to form compounds which have a low solubility character and possess cementitious properties.

Pozzolana is not a new binder. It was used by the early Egyptians, centuries ago. The Greeks used the volcanic tuff from the island of Thera and the Romans used the red volcanic tuff found in the Bay of Naples. The best variety of the tuff was found around Pozzuoli, hence it was called pozzolana.

The high cost of production of Portland cement and the resulting high cost of construction, led some countries in Europe and America to manufacture pozzolana cements so as to reduce the demand on Portland cement. Countries that use pozzolanas are Australia, Greece, India, the Russian Federation, Spain, the United States of America and Yugoslavia. However, there are inherent problems in the manufacture of pozzolana cements which could raise the cost of their production to almost the same level as Portland cements. Some of the problems are: the refusal of the existing Portland-cement factories to adopt pozzolana cement as one of their lines of production; a lack of sufficient quantity of pozzolanic materials; the high temperature demand by some pozzolanic materials to improve pozzolanic activity; and the extremely low rate of strength development characteristic of some pozzolanas due to a deficiency of essential elements.

In Africa however, Rwanda and the United Republic of Tanzania have gone into trial production of pozzolana. Organization of a small pilot plant for the manufacture of lime-pozzolana was reported by Apers and others (1). The base material is volcanic ash, found in north-western Rwanda. The lime deposit was found near the site for the factory at Runhengeri. The production cost of lime pozzolana was about RwF6000 (RwF100 = US$1) per ton, whereas the production cost of Portland cement was about RwF30,000 per ton. The lime-pozzolana cement costs about one fifth the cost of Portland cement. This is possible because pozzolana formed about 60 per cent of the content, 20 per cent was lime and the remaining 20 per cent was Portland cement.

Kawiche (2) reported the efforts of the Government of the United Republic of Tanzania in persuading the Mbeya Portland Cement Factory to produce pozzolana cement as one of its lines of production. There is not a single African country that is devoid of pozzolanic materials. The most common pozzolanic materials in Africa are laterite, limestones, clay and shales. Evidence is also available that agricultural wastes with pozzolanic characteristics are available in large quantities in Africa.

Comparison of pozzolanas with Portland cement

Pozzolanas do not develop strength at the same high rate as Portland cement. The strength which an ordinary Portland cement will attain in 14 days may not be attained by untreated pozzolanas in 60 days. The problem is that all pozzolanas have a low content of calcium oxide and a high content of silicon dioxide. This imbalance is responsible for the low rate strength development.

Tables 1 and 2 show the efforts of Lea (3) who analysed some pozzolanas that were found in Europe and the United States of America. It is pertinent, therefore, to collate pozzolanas of African origin with a view to combining one or two of them if necessary, for the improvement of pozzolanic activity or for volumetric purposes. The Africa Pozzolana Research Depository (APRD) which is located in the Civil Engineering Department of the University of Lagos, could be a focal point for this purpose. APRD has been involved in research, since 1985, on the exploration of local pozzolana, and is prepared to provide information and help, and carry out tests and analysis of any presumed pozzolanic material that is available in any part of Africa. In this regard, communications can be addressed to the author.

In order to determine whether or not a material is pozzolanic, the first test to be carried out is the standard consistency test on a paste made from finely ground powder of the material. This test is used to determine the standard consistency of the paste for use in the tests for the initial and the final setting times of the paste. The standard consistency test gives the indication of the quantity of water to be added to the dry powder of the material being tested to produce the type of paste to be used in the VICAT apparatus. The quantity of water required for a consistent paste is an indirect measure of the degree of fineness of the powder. The finer the powder, the more water it will require to produce a consistent paste.

The chemical composition of finely ground powder is the next step in the test to identify a pozzolana, whether or not the setting times are suspicious. The need to examine the chemical composition is to find out if the principal elements which normally exist in pozzolanas are present. There are several methods to determine the composition of materials. The major constituents expected in a pozzolana are silica, lime, alumina and iron oxide, although others like magnesia, calcium sulphate, potassium, titanium, sulphur and copper have been found to be present, depending on the source of materials. Generally, most pozzolanas have a very high content of silica as is evidenced in tables 1 and 2. The second highest is alumina. In most cases, untreated pozzolanas are deficient in calcium which is needed to promote pozzolanic activity in combination with silica and alumina.

The degree of pozzolanic activity can be increased by two major methods, viz., the physical method and the chemical/calcination method. The chemical and physical mechanisms by which pozzolanas develop cementitious properties are complex. In the physical method of increasing pozzolanic action, one or two, or even more pozzolanas can be combined to produce an entirely new pozzolana. The combination may be as a result of the non-availability of a sufficient quantity of one or two pozzolanas. A combination of these pozzolanas may produce increased quantity but not necessarily increased pozzolanic activity. The combination may, otherwise, be due to a balancing of elements having found that the element that is low or absent in one pozzolana is abundantly present in the other. For example, if the fly ash, with 11.6 per cent of calcium oxide, is combined with the rice-husk ash with 1 per cent calcium oxide (see table 2) a material with higher pozzolanic activity than the fly ash and the rice-husk ash may result. There is a graphical method of scientifically combining any number of pozzolanas to produce a single pozzolana, having a property, very close to an ideal composition which is the Portland cement. Suppose, there are three pozzolanic materials A, B and C with the following chemical compositions:

The chemical conversion of pozzolana is highly technical and requires experience. Care must be taken not to introduce chemicals which are strange to the chemistry of cement and which are likely to be deleterious to pozzolana cement when in use. The chemical process cannot be complete without calcination. But calcination involves clinkerization which can put extra cost in the production process. The chemical process must essentially be followed by two tests: (a) determination of the free lime, which is the same thing as the soundness test for cement by Le Chatelier; (b) determination of the sulphate content. The chemical process and calcination can be applied to the physical state, i.e., after the combination of one or two pozzolanas, if the result is still not satisfactory. In most cases carbonates of metals are recommended for the chemical conversion of pozzolanas for improved pozzolanic activity.

Amorphous silica was reported by Malquori (4) to react much more rapidly than the crystalline form because its structural bonds are weak and unstable, thus, making it vulnerable to calcium hydroxide. For example, in clay materials, annihilation of the bonds between silica and alumina, due to calcination, has made silica and alumina more reactive with calcium hydroxide. This process may not achieve good results in materials formed from crystallization in which silica and alumina are strongly held in their lattices. A good and easily improved pozzolanic material must have a great percentage of its silica in the amorphous form.

Mechanical tests involve the determination of the compressive and the tensile strengths on a short- and long-term basis. It is advisable to test the paste as well as the concrete made from the presumed pozzolanic material. In order to avoid results that are not reproducible the following points are important and must be noted:

(a) Temperature and humidity at the time of casting of the specimens must be recorded in order to quantify the effect of these variables on the test results.

(b) Test specimens prepared from pozzolanic materials should be cured under wet sacks and not immersed in water. Concrete, mortar or paste made from pozzolanas must be kept damp for a minimum of 60 days during which time it must have developed the full strength of an ordinary Portland cement. If pozzolanic specimens are immersed in water, especially at the early ages, there is a tendency to absorb water, which may increase the water of hydration and thereby reduce the strength of the specimen.

(c) Curing under wet sacks may continue for 90 days because some pozzolanas give compressive strengths which are higher than those of ordinary Portland cement at about that age.

Acknowledgment is due to the University of Lagos Central Research Committee, for providing the funds for this research which is part of the exploration of pozzolanas in Nigeria for the purpose of finding a cheap alternative to expensive ordinary Portland cement.