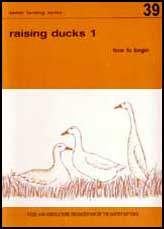 The first 26 volumes in FAO's Better Farming Series were based on the Cours d'apprentissage agricole prepared in Cote d'Ivoire by the Institut africain de developpement economique et social for use by extension workers. Later volumes, beginning with No. 27, have been prepared by FAO for use in agricultural development at the farm and family level. The approach has deliberately been a general one, the intention being to create a basic model that can be modified or expanded according to local conditions of agriculture.

Booklets 27 to 39 in the FAO Better Farming Series were written and illustrated by Tom Laughlin, working closely with the technical divisions responsible.