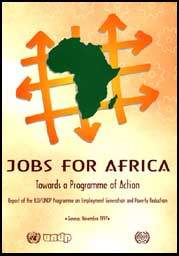 6.3 Evidence of a shift in national policies and strategies towards investment-led poverty reducing employment strategies in at least six (6) of the 10 project countries, as demonstrated from analysis of national investment programmes implemented after IPRE reports. Evidence of actual and potential employment generated.

6.4 At least 50-60 African experts fully trained in the design, and support to implementation of investment-led poverty reducing employment strategies.

6.5 Evidence of existence of regional networking mechanism between the regional project and national networks, and African regional and sub-regional institutions.

6.6 Pool of information (documents and computer-based) on best practices and successful experiences accumulated by the regional project, and evidence of same disseminated between regional network members and other African countries.

6.7 Regional institutions identified and trained in the accumulation and dissemination of information on best practices and successful experiences accumulated by the regional project.

6.8 Production of at least 75 per cent of anticipated project outputs.