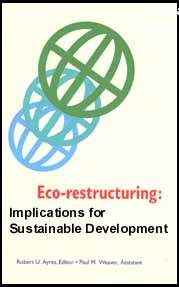 For pessimists (or, by their own estimation, "realists"), the deeper question lying all of the foregoing is this: should we defer taking actions that might have economic costs (at least to some sectors) in the hope that further research will reveal that the threat is overstated or non-existent? Needless to say, those likely to be affected adversely by restructuring changes - especially the extractive industries - will tend to argue vociferously for delaying any serious action until more research is done. Scientists, too, are usually in favour of more research. Both these groups are influential. Hence, the argument for delay is likely to prevail indefinitely, or until there is "indisputable" evidence of the seriousness of the problems.

A case in point: the scientific predictions of ozone depletion between 1974 and 1984 were countered by protracted arguments for delay by the affected industries. It was only after the discovery of the "ozone hole" that the resistance crumbled and the Montreal Protocol was adopted.

Unfortunately, in some cases indisputable evidence may not be available until it is too late to reverse, or prevent, major damage. Indeed, the damage itself may be the only convincing evidence. For example, the sceptics about climate warming may not be convinced until the average temperature of the earth has risen by half a degree or so (with accompanying sealevel rise). By that time, hundreds of thousands of hectares of low-lying land may have become unproductive or uninhabitable, and hundreds of thousands of peasants in Bangladesh or Indonesia may have been killed by floods. Thus it is particularly important to state clearly the case for not waiting until the evidence is "indisputable." It is also important to develop clear and defensible criteria for (1) when looking is better than leaping, and (2) when it is time to stop looking and to leap, even into the dark.

It need hardly be said that most elected officials in most countries are committed (at least in public) not only to the existence of such a painless development trajectory but to the idea that we are already moving along it, thanks to the "invisible hand" of the free market. According to this comforting view (which, it must be said, is supported by many mainstream economists), market forces left to operate with minimal government intervention will automatically induce the necessary technological responses. These "technofixes" (it is assumed) will compensate for gradual resource exhaustion and environmental degradation.

I believe that the optimistic view that the free market will take care of the problem is false and unwarranted. The present path is one in which virtually all of the trends are clearly in the wrong direction, as I have taken some pains to explain above. Energy use, exhaustible resource use, erosion, toxic pollution, and waste are all increasing globally.

It is not enough to establish a plausible case that technical solutions do exist. The institutional framework of society, as it is structured today, is not likely to allow these solutions to emerge spontaneously. If unregulated competitive markets were going to solve these problems, there should be some indication of it; the trends, at least, should be in the right direction. There is no such indication. The fact we must face is that competitive "free" markets are imperfect. Market forces do not function in some of the critical areas. Alternative approaches are going to be needed. Governments must intervene on several fronts. They must increase the level of R&D support in critical areas (notwithstanding the usual criticism that governments should not attempt to "pick winners").

Governments must also intervene to eliminate or compensate for externalities. Regulation is only part of the answer. "Green" taxes may be another part. The encouragement of voluntary agreements may be a part, also. Tradable pollution permits of tradable consumption permits may be a part of the answer in the future. But all of these interventions will have the effect, separately and cumulatively, of increasing the cost of resources vis-is labour and capital. This is the negative view. It has led many economists to conclude (with the assistance of so-called computable general equilibrium, or CGE, models) that environmental regulation, by driving up costs, must inevitably reduce the rate of growth of the economy.

The other side of this coin is that rising resource costs imply ipso facto that labour and some kinds of capital (especially knowledge based capital) will be relatively less expensive, vis-is resource inputs. The argument can be turned on its head. When one factor of production becomes less expensive than another, that factor will be more utilized. The factor that is to become less expensive is labour. This implies - or seems to imply - that the demand for labour can be expected to increase. In other words, costlier material resource inputs Þ more jobs and less unemployment.

Actually, this outcome would be a kind of "double dividend," if it can be achieved. But theory is one thing, practice is another. The service sectors are growing, to be sure. If the costs of physical materials were to increase (to compensate for externalities) this trend should accelerate. But the "growing tip" of the service sector is "high tech." It is health services, biotechnologies, telecommunications, and information technologies. Unemployed factory workers or miners cannot easily convert themselves into medical technologists or network systems managers. Since older, uneducated people are very difficult to retrain, the transition is limited by the rate at which skilled and educated young people can enter the labour force.

This, again, is an area requiring government intervention. In brief, governments must invest much more in human capital. This will be increasingly difficult in the environment of extreme budgetary stringency that will have to be faced by virtually every industrialized Western country in coming decades.

But the socio-economic and political dimensions of eco-restructuring are far more complex than even the last few paragraphs have suggested. As noted earlier, the socio-economic and political aspects of the "eco-restructuring" problem deserve - and must ultimately get much more attention than they have yet received. Indeed, it is a subject for another book.