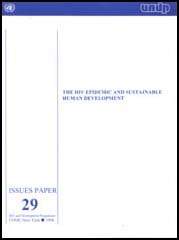 There would be general agreement that the primary objective of SHD is to eradicate poverty for unless this is achieved there can be no way in which citizens can lead a full and productive life -able to support their children and to engage in those political, economic and social activities which are the hallmarks of a democratic society. In a region such as Asia and the Pacific this is a huge task - with perhaps 70% of those living in absolute poverty worldwide. Poverty on this scale is simply not going to be eradicated in the foreseeable future nor is the accompanying income and asset inequality. For many countries in the region have not only large numbers of men, women and children in deep poverty, but they also experience the consequences of observing the life-styles, and often being exploited by, those who are rich. Obviously there are differences in the incidence of poverty and inequality between countries and within countries, but the essential defining element of the Region as a whole is the size of the poverty problem and the consequent scale of the policy and programme problem in attempting to reduce it.

How does the HIV epidemic relate to this state of affairs and what are the implications of Poverty and Inequality for the achievement of SHD? Poverty and HIV transmission are obviously related but this is in no sense a simplistic relationship. The poor worldwide probably account for most of those who are infected and affected by HIV, but there are many of the non-poor who are also infected and affected. So it cannot be simply poverty which determines those behaviours which lead to HIV infection, for those who are not poor (the well off and the rich, the educated and the healthy) are also often infected with the virus in all countries - including the Asia and Pacific Region. It follows that the absence of income constraints and having knowledge of the risks of acquiring HIV can still lead to behaviours which lead to infection - those associated, for example, with young men taking the plane from Kuala Lumpur for Bangkok on a Friday evening for sexual entertainment.

So HIV infection is not confined to the poor, and the rich and better educated are also becoming infected, with important consequences for SHD since these groups possess precisely the skills, education, training and experience so critical for achieving SHD. They account for much of the accumulated investment in human resources in the Region, and if SHD is right in its assertion that the human factor is THE important input in its achievement then their growing infection with HIV threatens what is going to be feasible. This seems to me to be one of the key important conclusions:

What of the poor who are absolutely the largest group in the Region as they are also the supposed beneficiaries of SHD? The poor are not only income and asset poor they also lack those characteristics of education and good health so important for a modernising economy and society. Within the poor it is often women and women-headed households who are the poorest of the poor - often deprived of reasonable access to education, housing, health services and lacking anything that could be described as a "sustainable livelihood". It is scarcely surprising that in these circumstances the poor adopt survival strategies which expose increasing numbers to HIV. This seems to be true for women, and especially young women, who as noted above are everywhere subjected to social, economic and political discrimination, and often exploitation. It is scarcely surprising that the group experiencing the fastest rate of growth of HIV infection worldwide is women, with in many countries rates of infection in young women under the age of 20 some 5 to 6 times those of young men. The typical age and gender distribution in most countries, including Thailand as a good example, is for young women to outnumber men amongst those infected at earlier ages (so that women lose more years of life as a result of earlier infection and through their generally reduced access to treatment in almost all countries).

The behaviours which expose the poor to HIV infection also constrains their ability to cope with infection - their lack of assets/savings, the vulnerability and uncertainty of their sources of income, their lack of access to knowledge about infection processes including understanding of opportunistic illnesses, and their general lack of access to health and other support services. Access to even the least costly of drugs and to inexpensive material supplies for the care of the sick is denied to the poor in most places with important consequences for HIV progression rates. Those infected with HIV unnecessarily die from opportunistic infections which can be relatively cheaply treated with inexpensive drugs, and thus lose years of potentially productive life during which they could have supported both themselves and their families. Again the evidence is that for the poor, as for the rich but with more disastrous consequences for the poor, the experience of HIV infection deepens personal and family poverty and is often associated with forms of social and economic discrimination and isolation.

· The HIV epidemic has its roots in the widespread poverty present in the region, although poverty is not the only factor driving the epidemic. But addressing through appropriate policies and programmes (SHD) the causes of poverty there is a chance that behaviours can be modified so as to reduce future HIV transmission.

· Since HIV infection and its costs are closely correlated with gender factors it follows that addressing sources of gender inequality through SHD holds out a possibility of reducing future HIV transmission and thus the costs of the epidemic. Gender inequity is a central objective of SHD and reducing this will make it easier to address the underlying causes of transmission. Improving access to sustainable livelihoods and to better social services will mitigate the impact of the epidemic on those affected.

· Sadly the HIV epidemic intensifies poverty and deprivation and increases social exclusion both for those infected and those affected. As such the epidemic makes the achievement of SHD that much more unlikely given that poverty in the region is already a major problem and the epidemic has the capacity to increase its level and incidence. The HIV epidemic makes the task of SHD greater than it would otherwise have been in the absence of HIV, and simultaneously reduces the human resource capacity in the region for undertaking those activities essential to poverty and gender focused programmes.