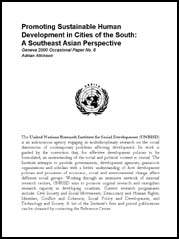 This paper analyses progress over the past few years in realizing sustainable development in cities of the South. Reference to sustainable human development in the title indicates that the focus of attention is not only on physical development, which tends to characterize "environmentalist" approaches to sustainable development, but also on the vital human dimension involved. The case material from three countries in Southeast Asia provides a basis for some generalization in this part of the world. While conditions and progress in the countries of the South vary widely, it is hoped that the lessons drawn here will be useful also for organizations and individuals working elsewhere.

In the following section of the paper some insight is provided into the various ways in which the term "sustainable development" is being interpreted. This includes a brief history of the concept, a discussion of various ways of understanding what it might mean and finally a sketch of how it is being used in the context of urban planning and management, together with some of the main difficulties that arise. A major issue is to highlight the importance that participatory forms of decision making have come to possess in initiatives designed to promote sustainable urban development.

Sustainable development is being pursued against a broader context of socio - economic change and of ideology and politics. The third section of the paper sketches salient points that are of importance for a proper understanding of the chances of sustainable urban development ever being implemented effectively. The major issues here are the rapidity of the process of urbanization in the South; a genuine change in the political climate that is fostering democratization and decentralization; and the politico - economic force of liberalization. The analysis points to the contradictory impacts that these contextual conditions are having on the fortunes of sustainable development.

The case material focuses in the first instance on Southeast Asia as a whole. It then provides detail on various dimensions of progress in three countries - the Philippines, Thailand and Indonesia. In recent years all three have experienced the collapse of authoritarian regimes and some progress in democratization and decentralization. They have also suffered from the severe economic crash of 1997. All have some experience in the formation of participatory approaches to urban environmental planning and management, but it is evident that there is still a long way to go before these become widespread or effective. As yet the concept of sustainable development remains an extremely ill - defined and remote goal.

The conclusions of the paper focus attention on social changes taking place in Southeast Asia - in particular the importance of a growing middle class that is bringing a new approach to politics - which hold some potential for a more coherent approach to sustainable urban development in the coming years. However, at the same time poverty remains a serious problem - one that is not being adequately addressed by the new middle classes and that is clearly an impediment to the achievement of anything approaching sustainable human development. The paper concludes with an examination of what external agencies might do to address the impediments to sustainable human development in urban areas of the South.