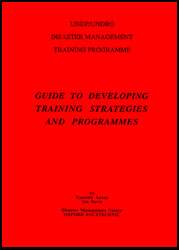 The establishment of a national training base requires an understanding of the structure of national disaster management administration in a given country. In this chapter some generic models and three examples - USA, Mexico and Turkey - are discussed.

Model 2: A specific Ministry for Disaster Planning and Co-ordination

Among the three models the first model is the most common management system in earthquake-prone countries with a centralized political structure. It has also been found to be the most effective model because:

a) It elevates the status of the co-ordinating office as it outranks other ministries, their committee members are obliged to attend,

b) It facilitates co-ordination through a vertical information flow which is difficult in Models 2 and 3 due to rivalries for status and resources of diverse groups.

c) It is the centre of political power and influence which is very useful when obtaining resources and making decisions in the management of a major earthquake.

Example: The United States of America

The authority levels in the United States run, in ascending order, from:

In the USA the size and population of each administrative unit vary from one area to the other. Individual states can be larger in area and population than many countries of the world. Police forces, legislation and disaster response are chiefly organized at State level, with assistance (many financial) from the Federal Government. Fire and rescue services are organized at County level. Building controls and ordinances are passed at city level.

The following structure is the basic plan for the San Francisco Bay Area* in California. At the local levels of the city and county, disaster management activities are very similar. At County level the overall coordination and management of emergencies is carried out by The Board of Supervision, which is carried out at City level by the Mayor’s Office. The following offices take part in emergency management. Their activities are given in a function matrix, below.

· Mayor’s Office or City Administrator’s Office has the overall responsibility for the co-ordination of activities.

· Emergency Operating Centre (EOC) is a centralized facility from which emergency operations can be directed.

Support can also come from Utilities Companies in reporting response and damage control, and the American Red Cross in reporting the location and availability of emergency shelters and volunteer services. Limited assessment of the severity and extent of damage, life losses and injuries, and the status of facilities (dams, hospitals, lifelines) are carried out Through ground and aerial surveys. The following offices and agents participate in these activities:

· Building and Safety and Public Works Department: inspects structures and building damage, supports public information through their radio network, coordinates debris clearance, advises the public on dangers and status of emergency, assesses and manages threats posed by dams and related structures, helps to manage and restore water and sewer services.

· American Red Cross: Staffs and manages first aid stations and other trained private first aid organizations and citizens with American Red Cross card, operates and manages mass care shelters under agreement with the State of California Office of Emergency Services and Department of Social Services, supports distribution of water, food and consumable goods with the help of voluntary organizations, helps home owners to inspect their buildings for damage and report residential damage assessment.

In the USA private companies and professional bodies take a very active support role in all stages of emergency management.

The administrative structure in Mexico has the following levels:

In Mexico, due to the conglomeration of large populations in the cities, delegations often have populations of million of inhabitants. However, the states are very large in land area and have a large degree of autonomy from the Federal Government. There is a great variation in the sizes and authority structure from state to state, and from one municipality to the next. By far the most advanced in terms of organization for disaster preparedness is the Federal District of Mexico City, the capital area. National authorities see the Federal District as setting the trends for the other states to follow, but at the present time, disaster administrations have not been fully established nor had the same degree of threat of disaster as the capital.

The Mexican National System of Civil Protection, in its structure and distribution of responsibilities, covers the state of emergency in relation to earthquakes affecting sizable parts of the country.

Whilst the Head of the State and the Mayor’s office are the highest level of authority in a major emergency, at the operational level, the Civil Protection Unit of the Federal District takes the overall co-ordination role to safeguard the participation of the related administrative units of the DDF and the non-governmental organations. Other administrative and voluntary groups involved in the planning or execution states are:

The General Secretariat of the Interior (Secretaria General de Gobierno), through the delegations, establish the level of impact of the earthquake in each area. Gobierno also cordinates the offices of the DDF that are in charge of search, rescue, security etc. These activities of the Gobierno are carried out mostly by its unit of Civil Protection.

The General Secretariat of Public Works (Secretaria General de Obras) of the DDF provides immediate attention to the impact of the earthquake on the services such as water, sewers etc. Provides technical support and machinery.

The General Secretariat of Social Development (Secretaria General de Desarrollo Social) of the DDF governs the medical services and helps with shelter need of the victims.

The General Secretariat of Protection and Security (Secretaria General de Proteccion y Vialidad) provides protection and security, re-evaluates the impact of the disaster.

A necessary element in emergency management in Mexico City is the Voluntary Civil Protection Organizations that one called upon by the Civil Protection of the D.F. and coordinated by Secretary General of Gobierno in an emergency. In addition to these major units related to emergencies there are other administrative bodies which handle legislative, financial and other administrative matters arising from a disaster situation.

In each delegation most of these functions are represented including medical assistance, machinery and stockpiling of emergency shelters, and at each level the administrative structure is organized to handle alt natural and man-made disasters and emergencies.

The administrative structure within Turkey consists of the following hierarchy:

In Turkey, smaller administrative units are determined in relation to population. For example, below 2,000 inhabitants, a settlement is classed as a village and only larger populations have a municipal structure, which is quite different in administration and legal jurisdiction to the rural areas. An example of this is that building laws and-controls can only be passed and enforced within a municipal boundary. The most important political division of the country is into Provinces. Turkey is divided into 67 Provinces, which act as Governorates, governed by a Presidential appointee, but without legislative powers. All legislation and major government decisions take place at National level, Turkey has one of the most centralized administrative structures of countries of a similar size.

Towns and cities vary in size and population, with the capital of each Province generally the largest in that region. For the declaration of a disaster, a one out of ten rule is legally stipulated for the number of people and buildings affected by the hazard, i.e:

The disaster management system in Turkey is hierarchically organized and following its political structure, most activities are carried out by the State. In addition, the army plays a very crucial role in emergencies of all scales, used to maintain law and order, helping with search and rescue, distribution of shelter and food, transportation, etc. The most serious natural disaster type faced in Turkey is earthquakes, but emergency management plans in Turkey are not specific to earthquakes and cover all man-made and natural disasters.