The construction of the intake facilities

The other important facility of the underground dam is the water intake that pumps up the stored groundwater. Many wells are installed over a large area of the basin for effectively collecting the groundwater. The elevation of the bedrock, the space between the wells, and the permeability of the aquifer are examined carefully in order to decide on the arrangement of the wells. The permeability of Lyukyu limestone is not constant. As a result of a careful examination and analysis of the data on geology and pumping tests, it has become clear that the permeability of the Lyukyu limestone on the Miyakojima Islands is mostly affected by the content of the clay derived from near the surface layer. Based on this fact, a finite element method model of an aquifer was built up and then the intake possibility in each of the planned wells was calculated by using this model.

A submergible motor pump with the diameter of 125 mm and with a water intake of 0.023 m³/sec was designed. These intake wells are located directly under the facility road for easy maintenance. The water-intake facilities are controlled by the pumping station. The groundwater is pumped up from the wells to the farm ponds on the hills through pipelines and then distributed to the agricultural areas (fig. 6). 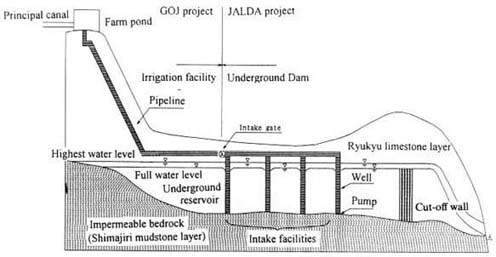