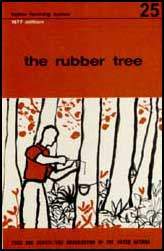 Grafting means putting into a young plant (the stock) a little piece of a branch (the scion) taken from a tree of good quality.

The young plant in the nursery is the stock. It will provide the roots of the plant which is to be put into the plantation.

You take a piece of a branch from a tree that gives plenty of latex this is called the scion. The scion will provide the stem of the plant that is to be put into the plantation.

To graft you use a grafting knife with a very sharp blade.

To do the grafting, you have to:

· prepare the young plant from the nursery (the stock)
· take the scion from a tree of good quality;
· place the scion in the stock.

Afterwards look to see if the graft has succeeded.

When the young plant in the nursery (the stock) is 3 or 3.5 centimetres thick, it can be grafted.

A few centimetres above the ground, make two cuts in the stock about 4 or 5 centimetres long and 2 centimetres apart. Then make one cut at the bottom to join the other two cuts at the lower end.

All these cuts are made in the bark only. You must not cut into the wood.

You will see, if you cut a stem right across, that

You cut a stem right across

The cuts must be made so that the bark can be peeled back.

Make the cuts on 20 plants, one after the other. You will see a white liquid flowing out. This is the latex.

Ask at a selection centre for rubber tree branches for grafting. These branches have about the same thickness as the stock. They are called grafting wood.

These branches for grafting have no leaves; the leaves have been taken off 10 days before cutting the branches. As soon as the selection centre has given you the grafting wood, the grafts must be done at once, during the next 24 hours.

In the first- year course we learned that on the stem there are buds below the leaves. If you look closely just below a leaf you will see that there is a bud.

This bud is called an eye.

To get a scion, take an eye with a little piece of the bark round it.

Take a branch of grafting wood in order to remove an eye from it. Round this eye make two cuts 5 or 6 centimetres long and 1 or 2 centimetres apart. You will see the latex flow out.

Remove the eye by cutting into the wood of the branch with the grafting knife.

Now you have a piece of grafting wood with an eye in the centre of it.

If you look at the back of this piece of wood, you will see that:

· in the middle there is wood;
· round the outside is bark.
· Putting the scion in the stock

With a rag, wipe off the latex that has flowed out of the stock.

Peel back gently the strip of bark cut when preparing the stock.

You must not touch the underside

Take the piece removed from the grafting wood. Make two cuts, one on each side of the eye, so as to mark off the scion.

Peel off the piece of bark with the eye. Do not take any wood and do not touch the underside of the scion.

Peeling off the scion

Now you have the scion by itself.

Next, put the scion under the strip of bark peeled back on the stock.

Do not touch the wood of the stock and the back of the scion.

Put back the strip of bark over the scion and bind it to the trunk with a band 4 centimetres wide and 60 centimetres long. The graft is finished.

Three weeks after making the graft, take away the band and cut the strip of bark at the top of the vertical cuts. The graft has been successful if the scion is well joined to the stock, and if the graft is green when you scratch it a little. There should be at least 85% of successes.

The young plants are now left in the nursery until the next rainy season. Then the grafted plants will be put into final position in the plantation.