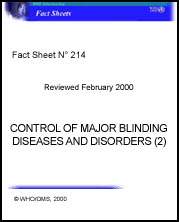 From among the many causes of avoidable blindness, five conditions have been identified as immediate priorities within the framework of VISION 2020. The choice of these conditions is based on the burden of blindness they represent and the feasibility and affordability of interventions to prevent and treat them. These are: cataract, trachoma, onchocerciasis, childhood blindness and refractive errors and low vision.

Other disorders, such as glaucoma and diabetic retinopathy, do not at present meet all these criteria. However, as VISION 2020 progresses, priorities are likely to include these challenges.

CATARACT, which refers to a clouding of the crystalline lens of the eye, stands out as the first priority amongst the major causes of blindness. Today, an estimated 20 million people are blind from this condition. Cataracts are not generally amenable to prevention but currently available surgery can restore near normal vision in a large proportion of the cataract blind.

The number of cataract operations per million population per year (Cataract Surgical Rate or CSR) is a useful measure of the delivery of eye care in different settings. There is currently a wide variation in the CSR from country to country and even within countries, ranging from an estimated 5000 in the USA to approximately 200 in the whole of Africa.

In poorer countries, financial and cultural barriers often exist to accessing surgical services even where available. In addition, the productivity in terms of surgical services is low. It is envisaged that under VISION 2020 there will be a marked increase in the number of cataract surgeries performed, particularly in the developing world.

In addition, VISION 2020 will place emphasis on achieving:

· high success rates in terms of restored vision and quality-of-life outcomes;
· affordable and accessible services, especially for underserved populations; and
· measures to overcome barriers and increase the use of services.

The strategies to be employed will include concerted teamwork, training, and better management, monitoring and evaluation of services.

TRACHOMA is endemic in 49 countries mostly in Africa, but also in the Eastern Mediterranean, Southeast Asia and the Western Pacific. It remains the most common preventable cause of blindness in the world with an estimated 5.6 million blind, visually impaired or at immediate risk of blindness from the disease and a further 146 million cases of active trachoma in need of treatment. Trachoma is common in areas of the world that are socio-economically deprived of basic needs in housing, health, water and sanitation. 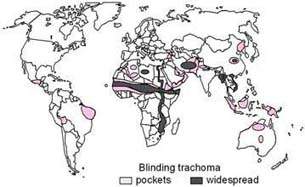 A strategy referred to as "SAFE" (Surgery, Antibiotic, Facial Cleanliness and Environmental Improvement) has been developed and is being applied in affected areas. It is expected that through the use of the SAFE strategy it will be possible to eliminate trachoma as a blinding disease by the year 2020.

A WHO Alliance for the Global Elimination of Trachoma (GET 2020) was established in 1997 to support the work of a broad spectrum of collaborating international organizations, nongovernmental development organizations (NGDOs) and Foundations. GET 2020 falls within the umbrella of VISION 2020.

Under VISION 2020, five million trichiasis surgeries will be provided between 2000 and 2010. In addition, at least 60 million people with active disease would receive treatment in the same period.

ONCHOCERCIASIS or river blindness is endemic in 30 countries in Africa and also occurs in small foci in six Latin American countries and in Yemen. Currently there are an estimated 18 million people who are infected with onchocerciasis. Among these, approximately 0.3 million persons are already blind from the disease. The disease is expected to be brought under control by the year 2010 if present efforts in endemic countries are successfully completed.

The recently developed and introduced community - directed treatment with annual doses of ivermectin would make it possible to eliminate this blinding disease burden from the affected countries in Africa and Latin America.

Over the last 25 years considerable progress has been made by the Onchocerciasis Control Programme in West Africa (OCP) through both vector control and ivermectin distribution. This success, when expressed in health, economic and development terms, was the motivating rationale for the launching in December 1995 of a new programme, African Programme for Onchocerciasis Control (APOC)

In Latin America, the Onchocerciasis Elimination Programme in the Americas (OEPA) is successfully using ivermectin distribution. A coordination group of NGOs is working closely with all three onchocerciasis control programmes and with national counterparts in virtually all endemic countries.

CHILDHOOD BLINDNESS is caused mainly by vitamin A deficiency, measles, conjunctivitis in the newborn, congenital cataract and retinopathy of prematurity (ROP). ROP is an established problem in developed countries because of the ever-increasing survival of low and very low birth weight infants. For the same reason, it is also emerging as a problem in economically developing parts of the world, especially in urban settings. 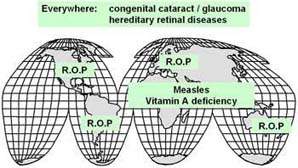 Other causes of childhood blindness that are congenital, or genetically determined, do not generally lend themselves easily to preventive strategies at present. There is a variation in the causes of blindness across countries and the pattern of blindness changes with time.

Childhood blindness is considered as a priority area, because of the number of years of blindness that ensues. Its developmental implications have also to be taken into consideration.

There are an estimated 1.5 million blind children in the world, of whom 1 million live in Asia and around 300 000 in Africa. Each year, an estimated half a million children go blind, of whom up to 60% die in childhood.

Another priority area - the provision of corrective spectacles to those with refractive errors - has been included as a part of VISION 2020. The Global Initiative will also address the issue of the correction of low vision.

The magnitude of refractive errors is not reliably known. Moreover, there is a wide variation in their prevalence throughout the world.

WHO estimates that 35 million persons are in need of low vision care. These figures are rapidly increasing as populations grow older.

VISION 2020 will strive to make refractive services and corrective spectacles affordable and available to the majority of the population through primary health care facilities, vision screening in schools and low-cost production of spectacles. Similar strategies will be adopted to provide low vision services.