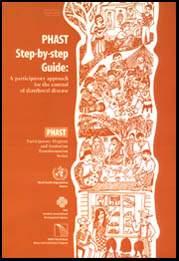 The SARAR methodology was first conceived by Lyra Srinivasan in the 1970s. Over the years, Lyra and her close colleagues, Ron Sawyer, Chris Srini Vasan and Jake Pfohl worked to develop participatory activities that would increase the self-esteem of individuals and community groups and help them to acquire the skills to contribute effectively to decision-making and planning for meaningful change. In the early 1980s, the United Nations Development Programme (UNDP) created the PROWWESS Project (Promotion of the Role of Women in Water Supply and Environmental Sanitation Services) to identify strategies and tools for increasing the involvement of women in water supply and sanitation projects. Under the guidance of Lyra Srinivasan as training director, the PROWWESS team (which included Siri Melchior, Deepa Narayan, Aminata Traornd Ron Sawyer) further developed and adapted the SARAR methodology to the special needs of the water supply and sanitation sector. In 1990, UNDP published, Tools for community participation: a manual for training trainers in participatory techniques.

In 1990, PROWWESS became part of the UNDP/World Bank Water and Sanitation Program, where it was possible to further consolidate its approach. As the participatory development specialists for the UNDP/World Bank Regional Water and Sanitation Group in Nairobi, Ron Sawyer and Rose Lidonde, together with other PROWWESS associates, were instrumental in training African community workers and in spreading the methodology to other African countries.

In 1992 the UNDP/World Bank Water and Sanitation Program and WHO joined forces to produce better methods for hygiene education by adapting the SARAR methodology more specifically for sanitation and hygiene behaviour change. Thus was born the PHAST initiative: Participatory Hygiene and Sanitation Transformation.

A collaborative process was begun in 1993 in four African countries (Botswana, Kenya, Uganda and Zimbabwe) to further develop and field-test these methods. PHAST brought together and adapted a number of SARAR activities which had already been developed and validated under the PROWWESS Project, and created new ones. Among the activities transferred to the PHAST initiative were several designed by Ron Sawyer and associates, and piloted as a package in Mexico under the auspices of a UNICEF-supported national diarrhoea control programme. Through a series of creative design and training workshops, PHAST sought suggestions for activities from many others in Africa who had been working on hygiene behaviour change. The creators of individual activities are listed in the Activity, tool and artist acknowledgements.

UNICEF offices in Botswana, Kenya and Zimbabwe became involved at this stage and, together with government counterpart agencies, field-tested the approach in many of the districts in which they are active.

Since the field-test phase, PHAST has been adopted by several countries within and some countries outside the African Region.