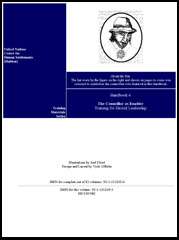 The enabling role for the councillor falls somewhere between facilitating and empowering. Since both of these bracketing strategies will be pursued under their own labels, later we don't want to spend much time now in describing them. Briefly, facilitating is the use of human relation skills persuasion/motivation/group process) to help others do better what they have decided to do anyway. Empowerment, on the Other end of the process continuum, is providing someone with the necessary authority (from psychological to real) and resources to do whatever needs to be done.

Within the enabling strategy are some options, based on what is required to enable" the other party to assume roles and responsibilities that would normally be carried out by public institutions such as local governments. For example, someone else, such as the private sector, non-governmental organizations, community-based, self-help groups, and individual citizens can do what needs to be done. But, such groups (a) need council approval to go ahead; or, (b) they need council authority (leg sanction); or, (c) they need resources from the council or other source. These resources might include:

Or, (d) someone else can help council do it better than they can do it alone (collabouration).

Enabling strategies are particularly effective in working with NG0s, community (neighbourhood) groups, and the private sector. They can often undertake programmes and services at a lower cost and help minimize the long-term commitments of the local council, which, in turn, conserves your scarce resources to perform other services. Using these kinds of strategies may require you and your colleagues to revise your thinking about the role of your local government. In his State of the. City address, George Latimer, the mayor of St. Paul, Minnesota said:

City government will have to make some adjustments and in some ways redefine its traditional role. I believe the city will more often define its role as a catalyst and facilitator The city will more often find itself in the role of defining problems and then assembling resources for others to use in addressing those problems... . City government will have to become even more willing to interweave scarce public and private resources in order to achieve our community locals.6