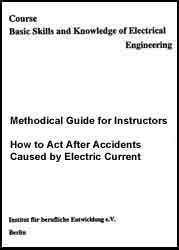 The introductory instructions on each respective working technique can be held with the trainees in a classroom. During the instructions, make sure that the trainees write down necessary supplements and answers into the "Trainees' Handbook of Lessons".

The "Trainees' Handbook of Lessons", in its structure, is adapted to the introductory instruction. The main points have to be imparted. A precondition for learning the techniques of "Acting After Accidents

Caused by Electric Current" is that the trainees master the techniques for first aid.

Therefore, refer to these techniques in the form of repetition. The main points of "Rescue of Injured

Current" should be imparted making intensive use of all teaching aids that are available.

Effects of electric current on the human organism

- Explain to the trainees that the intensity of current and the time of the current flow through the body are decisive for the degree of its detrimental effects.

- Starting from Ohm's law, the current intensity is determined by voltage and resistance.

- In this context, repeat the importance of protecting oneself against hazardous contact voltage.

- Especially point to the most dangerous effect of electric current, that of ventricular fibrillation as well as to the incurable cerebral defects due to missing blood circulation.

- Explain to the trainees that the heat effect of electric current can cause burns of the skin as well as fire by an electric arc.

- Put special emphasis on the fact that fire caused by electric current must never be extinguished by water.

After this section the trainees must have realized that first aid must be rendered promply and carefully.

Rescue of injured people out of electric plants under 1 kV

- Give detailed practical demonstration of the possibilities to break an electric circuit. However, do only explain how to create a short circuit.

- Especially deal with the possibilities of the rescuer to protect himself, if it should be impossible to break the fault-current circuit.

Here, the trainees must learn that the rescuer has to protect himself against the dangers of electric current when trying to rescue injured people.

Immediate measures after an accident caused by electric current

Explain to the trainees that the degree of health defects and the life of the injured person to a far extent depend on the correct measures of help.

Explanations and demonstration in this field should be concentrated on the following techniques:

Here, the survey of "Measure in the Case of Unconsciousness "from the "Trainees' Handbook of Lessons" may be used as a blackboard diagram or projected illustration.

Measures to be taken when the injured person is conscious

In doing so, pay attention

- that during the demonstration the aim and purpose of the demonstrated actions are explained;
- that the correct sequence of operations is emphasized;
- that it is pointed out that it is important to taste the alkalinization solution.

It is also important to point to the fact that every person who had an accident caused by electric current has to be considered as a seriously injured person and must not be left alone!

After demonstration, one or two trainees should repeat the required operations. Here, the correct order of actions has to be observed and faults have to be corrected immediately.

In order to develop the practical skills of the trainees, they should practise the measures repeatedly.

With demonstration and relevant explanations it is assumed that the injured person has just been rescued.

In the order: explanation - demonstration - exercise all required measures are carried out in logical order at a person for practice. The examination of the injured person should be demonstrated in such a way that statements of the extent of injuries can be made. Make sure that such examination takes only little time!

The examination should be concentrated on

This should be followed by further measures such as

Make clear that respiratory arrest means acute danger of life! Together with the trainees repeat the consequences of an interruption of oxygen supply to the brain. In doing so, show the correlation between blood circulation, respiration and blood supply to the brain. Since 5 minutes at the latest after respiration has stopped it comes to incurable cerebral damages, make clear that the rescuer must start artificial respiration as quickly as possible.

Explain to the trainees how and why artificial respiration has to be prepared.

- opening of the mouth of the injured person
- cleaning the oral cavity
- bending the head backwards.

Cleaning of the oral cavity is only explained theoratically. Point out that with unconscious people there is the danger of suffocation.

In order to prevent this, the upper respiratory tract must be made free by overstretching the head backwards. After demonstration and explanation, the trainees must practise the preparatory measures for artificial respiration.

Wrong movements have to be corrected permanently.

Always bear in mind, that the trainees acquire safe skills only, if they practise the measures again and again. Therefore, the main points of the immediate measures should now be repeated in their entirety.

For showing the different methods of artificial respiration, the survey of "Measures in the case of unconsciousness" may be used.

Again it is important to emphasize that every second is precious and that promt and effective help decides about life or death of the injured person.

- By blowing the breath of the rescuer into the lungs of the injured person the required oxygen is supplied. Process of breathing in!

- The injured person breathes out by the natural elasticity of his chest. Process of breathing out!

Especially point to possible mistakes with artificial respiration. These should be mentioned, explained and together with the trainees it should be found out how such mistakes can be avoided.

With the preparation for and giving of the demonstration the following should be taken into consideration:

- The trainees must be told to follow each demonstration very attentively.

- The working place has to be carefully prepared for the demonstration and exercises that follow.

- All required auxiliary means have to be kept ready before the demonstration starts.

- The dummy and breathing apparatus have to be cleaned before and after every exercise. This prevents aesthetical and hygienical objections on the part of the trainees.

- Make sure that each trainee is in a position to exactly follow each demonstrated movement and operation.

- During the demonstration, each individual phase has to be explained and the correct sequence of operation be pointed out.

- Mention the possible mistakes with artificial respiration as well as the way to avoid them.

- Make sure that the trainees recognize the signs of returning life.

When the trainees exercise the giving of artificial respiration, especially see to the following:

Point out that this technique should be used only if the respiratory tract of the nose is blocked.

With the exercises of the trainees that follow the explanations make absolutely sure that the correct order is observed.

It is important to point out that with this technique of artificial respiration the nose of the injured person must be kept closed.

These are shown to the trainees and their application is demonstrated.

Point out that also here the success of respiration should be watched after each breath.

At this point, repeat the sign of returning life together with the trainees.

Make clear that, in case of emergency, one must not search for auxiliary equipment but start with artificial respiration immediately!

Explain to the trainees that the oral tube is allowed to be used only by a physician, because a layman could easily injure a person's respiratory tracts by intubating.

Explain to the trainees that the manual techniques - especially with respect to the breathing volume - are inferior to the methods of giving artificial respiration.

The manual methods should only be used, if extensive wounds in the face of the injured person make the respiration from mouth to mouth impossible.

Also here, make the principle of the manual methods clear:

- Breathing out
By pressing the chest down and thus the lungs, the air is forced out of the lungs and a low pressure is created.

- Breathing in
With relieving the external pressure, the chest - due to its flexibility - returns to its original position, the lungs expand and air is taken in. It must be made clear that the manual methods of respiration must be started by breathing out.

In preparing and giving the demonstration, consider the following:

- Start from the fact that the injured person has just been rescued.

- It is recommendable to repeat or let the trainees repeat why the immediate measures must be taken without delay, to have some chance of succeeding at all.

- It would be best if the demonstration was given on the floor. For this purpose, a blanket or tarpaulin should be kept ready.

- Demonstration can be given at a person for exercise.

- Make sure that all trainees can follow the sequence of operations.

- During the demonstration make the trainees constantly aware that it is a moral duty of each of them to put his personal interest after the rescue of human life.

- The movements are accompanied by explanations during the demonstration.

- The demonstration should be repeated by one or two trainees in order to check whether the actions shown have been understood.

- With the then following exercise pay attention that the trainees observe the measures which were demonstrated and repeated as well as the explanations.

- During the exercises, the trainee should be given assistance. Mistakes are corrected immediately.

In the course of the exercise pay attention that

At the beginning of explanations and demonstration, again make the trainees aware that by all means human life must be saved unselfishly.

The trainees must realize that circulatory arrest is a sign of utmost danger to life.

Her, let the trainees repeat what is understood by ventricular fibrillation and how dangerous it is.

It is recommended just to indicate the required measures at a person for exercise, to demonstrate them with the help of a dummy or to explain them by illustrations. Again it is important that the trainees can see all details well and concentrate upon the demonstration. Explain to the trainees why the feet of an injured person should be elevated if the pulse beat of the person is weak.

Before giving demonstration, explain to the trainees the principle of cardiac massage.

Point out that before beginning the cardiac massage, 10 breaths must be given in breathing rhythm.

After that, cardiac massage is combined with artificial respiration in the ratio of 4:1. That is to say that 12 strokes of cardiac massage have to be followed by 3 breaths.

It is recommendable at this point to repeat the methods of artificial respiration together with the trainees.

With the then following exercise special attention has to be paid that the trainees carry out the individual operations accurately.

Special value has to be attached to the control and correction of the following actions:

Emphasize that the cardiac massage must be continued until the heart of the injured person starts to beat or till a physician orders to stop the massage.

Hints for the transportation of injured people

In this context, it is important to point out to the trainees that

- injured people have to be transported very carefully;

- the condition of health of the person concerned can be decisively influenced by a perfect transportation;

- the most important rules of the transportation of injured people must be known.

The demonstration must show the trainees what they must pay special attention to in moving injured people and how exactly transportation has to be carried out.

After the demonstration, the trainees should practise how to move injured people.

During these exercises, special value is attached to

Show the trainees where near their working place stretchers and auxiliary means for moving injured people are to be found.