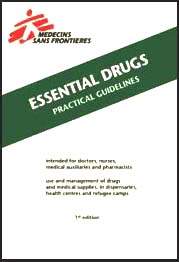 Use of antibiotics in precarious situations

Knowing which antibiotic to prescribe is difficult in precarious situations.

The diagnosis of an infection is essentially based on clinical criteria. It is practically impossible to rely on bacteriology (culture, isolation and identification of the bacteria). At best, a Gram stain can give an idea of the nature of the bacteria involved.

The choice of treatment protocol depends on the context in which the patient is seen:

- Dispensary: many patients examined rapidly and therefore difficult to follow up for treatment. Standard protocols should be drawn up for diagnosis and treatment of the most frequently encountered diseases. The number of available antibiotics will be restricted.

- Health centre and hospital: prescriptions can be more versatile. In case treatment fails or the patient tolerates the initial treatment badly, altematives are available. More antibiotics are available.

- Poor diagnosis: clinical signs of infection may be caused by diseases that are not of bacterial origin: viral, parasitic.
- The dosage or the length of treatment has been inadequate.
- The treatment has not been followed properly.
- Vomiting occurs after the drug has been taken orally.
- The interaction between different types of drugs taken by the patient decreases their absorption (e.g. tetracyclines with ferrous salts or antacids).
- The antibiotic does not diffuse well into the infected tissue (abscess, cerebro-spinal fluid).
- The antibiotic becomes inactive after several products have been mixed in the same infusion bag.
- The antibiotic has passed its expiry date or has lost its efficacy due to poor storage conditions (most antibiotics simply lose their effectiveness; tetracyclines, however, become toxic for the kidneys and they must be avoided).
- Bacterial resistance to the chosen antibiotic.

The following table gives, for each type of infection, the bacteria most often responsible for such an infection and the antibiotics most suited both to these bacteria and diffusion into the infected tissue.

- Medication preceded by an asterisk (*) is contra-indicated during pregnancy.
- Figures between brackets give an idea of the average price per treatment in French Francs (standard treatment being 5 days, except for typhoid fever: 3 weeks, and for trachoma: 1 month).
It is interesting to compare prices of different treatments. The cost would affect the choice of a particular treatment, along with other criteria such as effectiveness, tolerance and expected results.
- Antibiotics under the heading "alternative" should be prescribed if the initial choice of antibiotic fails, is not tolerated or is contra-indicated.

A combined treatment using several antibiotics can only be justified in cases of severe infections.

Certain combinations are to be avoided because the effect of one antibiotic may neutralize the effect of the second when administered at the same time.

At any rate, the decision to use antibiotics in combination must be made by a doctor for each case and such a decision must never be made as a matter of course.

Penicillin and its derivatives should not be used in combination with tetracycline, chloramphenicol, erythromycin or rifampicin.

PENICILLIN AND ITS DERIVATIVES

- Penicillin V or phenoxymethyl penicillin taken orally is the first treatment for tonsillitis. However, its effect on pulmonary infections is variable.
- Penicillin G or benzylpenicillin should be reserved for acute infections only. Because of its rapid elimination, injections every six hours are vital. This is difficult to manage outside a hospital environment.

- Procaine penicillin has the advantage that it can be injected in one single dose once a day. It reacts quickly (45 to 60 minutes) and can only be injected IM.

For the treatment of gonorrhoea, it must be combined with probenecid.

- Ampicillin is a broad-spectrum antibiotic. It is only to be used for the treatment of respiratory infections in children under 5 years of age: it is active against Hphilus influenzfrequently the cause of these infections. Its use is also recommended for pregnant women, for whom other antibiotics are frequently contra-indicated. Apart from these examples, the use of cheaper antibiotics is preferred. The injectable forms should only be used in cases of severe infections.
- Amoxycillin has the same spectrum as ampicillin and has the advantage of a better intestinal absorption rate which allows lower doses to be given.
If orally administered, use amoxycillin rather than ampicillin if the cost is more or less the same.
- Cloxacillin is a small spectrum antibiotic, limited to the treatment of staphylococcus infections, as most of these have become resistant to penicillin.

Erythromycin should only be used in cases of penicillin allergy because it is expensive.
It is the only macrolide available in generic form. The others have the same indications.

Chloramphenicol is a broad spectrum antibiotic, effective against many types of infections. It should be the antibiotic of first choice in cases of typhoid fever.

Because of its efficacy and low cost, it is still widely used, but because of the risks of haematological toxicity, its use should be strictly limited to specific indications: typhoid fever, meningitis and broncho-pneumonia.

The injectable form of chloramphenicol in oil should be reserved for meningitis epidemics.

- The use of sulphonamides in the form of sulphadimidine is limited to lower urinary infections without complications (without lumbar pain or fever).
- Sulfadoxine is a long-acting antibiotic (about one week). Despite the existence of resistant strains and significant side-effects, it is still incorrectly used for meningitis or cholera epidemics.
- The use of non-absorbing sulphonamides (sulfaguanidine, phtalysulfathiazole) is not recommended because they rarely work in cases of intestinal infections of bacterial origin.

Combined sulphonamides
- The use of a sulphonamide in combination with trimethoprim (e.g. cotrimoxazole) benefits from the synergic effect of the two products. Indications are more numerous than for simple sulphonamides: urinary infections with fever, pneumonia's..

- Because of the multiplication of organisms resistant to cyclines, they should be kept for specific infections: brucellosis, cholera, borreliosis, typhus, gonorrhoea resistant to penicillin and certain chronic pneumopathies. They must not be used as a matter of course and must always be prescribed under medical supervision.
- Doxycycline has the advantage of being able to be administered in a single dose for the treatment and prevention of cholera or typhus. It is still less widespread and better tolerated than tetracycline, even in case of renal disease.

The specific indications for gentamicin are such that they should always be prescribed under medical supervision because of its toxicity, cost and frequent appearance of resistance.

ANTIBACTERIAL (ANTISEPTIC) OF THE URINARY TRACT

It acts over a sufficiently wide spectrum to cover the majority of lower urinary tract infections in young women. In that case, it can be prescribed as first choice except late in pregnancy. Its cost is low.