Office of the High Commissioner for Human Rights in Guatemala

The Office participates in the Interagency Group of Gender and Advancement of Women, which has the goal of contributing to the realization of gender equality in Guatemala by reinforcing the application of gender policies in all UN programmes and projects. The Interagency Group has drafted a document on gender indicators and the advancement of women in the frame-work of the Administrative Consultative Committee (ACC).

In 1998, the Office took an active part in the Con-science Tribunal on women's human rights violations, which was held during the celebration of the 50th anniversary of the Universal Declaration of Human Rights. The Tribunal was established in an effort to construct an alternative mechanism to fight for women's human rights. 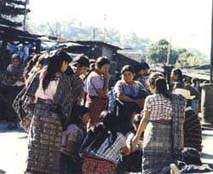 Women in a market in Guatemala

The Office has also worked with indigenous groups and women's organizations on the theme of human rights and given support to the Office in charge of the Rights of Women within the Ombudsperson Office.

The Office is also collaborating with COPREDHE (Presidential Human Rights Commission) in selecting consultants to work as trainers on issues relating to women's human rights and violence against women. The women's sector in Guatemala has identified a range of issues they would like to address, including the administration of justice - an area that has not been adequately reviewed from a gender perspective. Now is a good opportunity for the UNCHR in Guatemala to do so. The justice system in Guatemala should protect and strengthen the application of the law as it concerns women as a means of respecting and protecting both women's human rights and their economic development - two issues mentioned in the Beijing Declaration and Platform of Action.

In developing a gender policy, it is important that the UN agencies identify strategies of work which incorporate NGOs as well as government agencies.