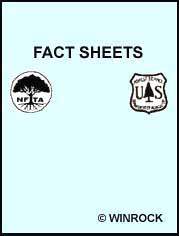 Agroforestry land-use technologies are nothing new in the Pacific Island region, or the world for that matter. In a loose sense, agroforestry began when Man first turned from a hunting and gathering lifestyle and took up plant culture. Though maybe not purposefully integrated, trees and farm crops have always occurred together in systems where subsistence was the primary farming objective.

Social trends and economic development forces of more recent times have placed a huge amount of importance on short-term product and thus profit maximization. Cash, rather than subsistence crops have understandably been the focus of more advanced societies. Economic rationale tells the farmer to maximize production of the crop that gets him/her the most money at the market. Agroforestry systems were often replaced with crop mono-culture where trees were seen to interfere with crop yield maximization.

Today, many agree that the rapid agricultural conversion that went on during the 'green revolution'. was short-sighted indeed. Intensive mono-cropping systems, though perhaps more profitable for a time, are much more risky and costly in the long run. Risky because crop prices are always changing and pest infestations can destroy entire harvests. Costly because these intensive farming practices degrade most soils rapidly, and thus require expensive chemical and fertilizer inputs to sustain productivity.

The scattered and isolated nature of Pacific Island countries is a mixed blessing. The region has been excluded from most global trade activities and international market pressures. Most countries have not been driven to costly mistakes in attempting to maximize short-term export income. Multi-cropping agroforestry systems remain intact over much of the landscape.

The region is not without its problems. Arable land has never been in abundant supply. Growing population pressures and modern land ownership uncertainties make land scarcities increasingly apparent. The most common traditional agroforestry systems of the swidden variety, are no longer sustainable where a shortage of land forces farmers to reduce fallow periods. Root crops, staples in most cultures, require that the soil be disturbed twice in a single rotation. Shortened fallows do not allow soils to recover. They quickly lose their productive potential and become highly erodible.

Traditional agroforestry systems must be improved so as to increase subsistence and market produce from limited land areas over time. In more modern, more intensive agroforestry systems, trees are not just tolerated or passively allowed to regenerate during fallows. They are planted, arranged, managed, and harvested alongside agricultural crops and/or farm animals in a way that optimizes overall farm productivity in the short and long term. Trees are used to create a more favorable and sustainable environment for crop and/or animal production while providing additional products themselves.

Why are Agroforestry Systems more Productive?

They use limited resources more efficiently.

· SOIL NUITRIENTS: Deep tree roots take up soil nutrients and moisture that are out of reach of root crops.

· LAND: Trees serve to continuously sustain rather than periodically rebuild soils. Fallow requirements are reduced, leaving more land in production at any one time.

They provide a more favorable environment for sustained cropping

· NUTRIENT CYCLING: Trees draw nutrients from below crop root reach and then release them on the soil surface as leaves fall or branches arc pruned.

They provide a more continuous flow of more products over time.

· LONG-TERM PRODUCTS: Valuable construction timber, larger fuelwood, and other wood products such as pulp and veneer.

Why is Agroforestry so Necessary in the Pacific?

· INTENSE RAINS: On sloping terrain, frequent, intense rains wash soil away rapidly if it is disturbed and unprotected.
SOILS: Soils derived from volcanic rock and ash are commonly acidic and thus more subject to nutrient loss/leaching.

· LAND SCARCITY: Arable land is the most scarce and thus valuable natural resource.

Agroforestry is arguably a more sustainable and optimal way of farming in most resource-limited environments. This seems to be especially true in the Pacific, where growing and developing populations are confined to relatively small and scattered areas.

Successful agroforestry though, requires careful planning and usually more labor. Trees and crops must be arranged and managed properly if overall productivity is to be increased and sustained. Left unmanaged, trees can out-compete crops, and reduce yields.

Pacific Island farmers appreciate the worth and function of trees in agricultural systems. They did not traditionally, however, manipulate and manage the tree component to the degree that most modern agroforestry practices require. They must be convinced that the products and benefits will justify their added time and labor inputs.

The active promotion of agroforestry in the Pacific, through information transfer, demonstration, and on farm research, is without question a worthwhile and timely task.