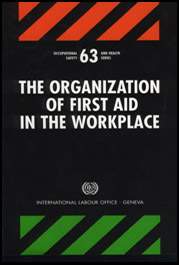 1.4. An organized approach to first aid

First aid cannot be planned in isolation. Other measures to protect and promote the health and safety of the workers must be taken into account. Consideration must be given to the availability and proximity of medical resources. First aid requires an organized approach involving people, equipment and supplies, facilities, support and arrangements for the removal of victims and non-victims from the site of an accident to safe shelter.

Sometimes the question is raised: What else can first aid do? Being part of workers’ total health care in an enterprise, should first aid also deal with minor illnesses? Should it provide workers with essential information on their health and safety? Should it help in identifying workplaces where accidents are most likely to occur? If an occupational health service exists, these will be part of its functions. If none exists, other arrangements will be necessary to fulfil these and other functions. This is particularly important in small enterprises and isolated workplaces. Trained first-aiders will be of great help in cases of common injury or illness. In some countries, first-aid personnel may provide essential treatment of minor indispositions which would otherwise receive no treatment.

The organization of first aid in small enterprises is a topical subject which raises a variety of issues. Efforts should be made to clarify it, even though this may be difficult.

From a medical and from an ethical point of view, a burn, a broken leg or a myocardial infarction needs the same care irrespective of whether it happens in a large or in a small enterprise. From a practical point of view, it is obvious that the manner in which assistance is provided will be different. How can the ethical and the practical points of view be reconciled?

One approach, which is described in this publication, is to recognize that there is a continuum leading from the knowledge of the occupational hazards, their prevention, first aid, emergency treatment, further medical care and specialized treatment, and through to readaptation and reinsertion at work. First aid itself should be seen as a process which includes:

(a) the identification of the harm incurred: How serious is the injury? For example, does the pain correspond to a muscular strain which will disappear in a few hours or does it suggest a hernia which will need a rapid surgical operation?

(b) first aid itself: What should be done now? In an emergency the reply may be straightforward, but in most cases it is not obvious; a very cautious attitude is necessary;

(i) means of communication and transport: Contact the right person(s) promptly;

(ii) pre-arranged “referral system”: Who should be contacted in which case? This is one of the main issues.

Although the quality of the assistance given to those taken ill or injured at work in a large or a small enterprise should not be different, it seems acceptable that the part of the means for assistance which should be readily available in the enterprise, and the part which should be made available through a pre-arranged “referral system”, may very well depend on the estimated frequency of accidents and their potential severity.

An example will clarify this point: fire explosion and severe burns may occur in a refinery, as well as in the workshop of a baker with one apprentice. In the case of a refinery or of a chemical plant with several thousand workers, there will be a doctor or a nurse on shift and an ambulance may be on stand-by. In the case of a bakery, there should be a telephone with telephone numbers of the fire brigade, an ambulance service and the police (who are often qualified first-aiders). If there is no telephone, it may be the baker’s wife who receives instructions to send one of the children to call a friend who can ensure rapid transportation to the nearest clinic.

Whatever the degree of sophistication or the absence of facilities, first aid should be organized. This means that the sequence of actions to be taken in the case of an unforeseen event (and in the case of an emergency in particular) must be determined in advance. This must be done taking due account of existing and potential occupational and non-occupational hazards or occurrences, as well as ways of obtaining immediate and appropriate assistance. There is a very wide range of situations which varies not only with the size of the enterprise but also with its location (in a town or a rural area) and with the development of the health system and of labour legislation at the national level. If nobody in the enterprise is qualified, the worker should be taken to a nurse, a doctor, or the hospital, or a doctor or a nurse should be called for (decision based on common sense). If a trained first-aider (or a traditional healer trained in first aid) is available, the following choices are possible:

(a) serious cases: the first-aider acts according to the training received and ensures that medical assistance is provided in the shortest possible time (he or she accompanies the patient);

(b) minor cases: the first-aider acts within the limits set during training and advises systematically whether medical advice should be sought;

(c) many cases are neither major nor minor - and here lies the difficulty. It is advisable neither to dramatize the situation (people will not take further advice seriously) nor to take it lightly; the first-aider should never be a substitute for the doctor; advice to seek further medical assistance (including arranging an appointment with a doctor as appropriate) should be systematic, and this points to the need for an appropriate pre-established “referral system”.

In order to promote the organization of first aid in small-scale enterprises, several approaches can be used. In particular, the problem should be approached from two angles:

(a) public health: it would be an advantage if a large proportion of the population were to be familiar with life-saving practices such as the mouth-to-mouth resuscitation method and how to control bleeding; this can be promoted in various ways (even in developing countries) including the use of the media (e.g. newspapers, radio and television), primary health-care networks, and maternal and child health care, making a first-aid course compulsory when obtaining a driving licence, etc. The public health approach may also be used to immunize workers against tetanus and to inform them of health risks due to infection;

(b) labour regulations: as soon as an enterprise is of a certain size, labour regulations may make compulsory the presence of a person trained in first aid (examples are given in the following chapters); this person will then act according to instructions given during training. To have trained first-aiders available in enterprises where 20 workers or more are present seems a suitable objective; this would represent a network of knowledgeable persons which could even be used by smaller enterprises located in the vicinity.

As regards the organization of first aid, the main issue is to plan in advance who should be called, when and how. This is a basic question, and there is no excuse for not answering it. It is not a technical matter, there are plenty of opportunities to get advice and there is time to plan in advance. The reply may be very simple: a telephone and a few telephone numbers posted prominently next to it. It may be more sophisticated: the telephone number of the nurse, the doctor, the fire brigade, the electrical department, the hospital, a poison control centre, a specialized centre for severed fingers or for hand surgery, the ambulance service (including a specially equipped ambulance in case of a cardiac arrest), and so on.

Furthermore, some countries have established an emergency network accessible through a single standardized telephone number for the whole country. The call to this number is usually free of charge. In addition to its simplicity and rapidity, this type of organization has the advantage of quickly mobilizing appropriate assistance from a variety of bodies and emergency services (fire brigades, police, poison centres, hospitals, ambulances, etc.).

The system may include both services within the enterprise and bodies outside it. There are several critical points:

- when to call (instructions to a sufficient number of persons, verbally and in writing);

- where to call (instructions given clearly and posted in a prominent place);

- how to call (preferably several alternative methods should be arranged).

This may be called a pre-established “referral system”. It must be planned irrespective of the size of the enterprise. Such a system should also exist at the level of the family.

Unfortunately, people tend to think that “accidents happen to others”. The question “What should I do in the case of an accident?” is not raised, and consequently there is no reply. When an accident does occur, there is no pre-established system and first aid cannot be provided in an optimal manner. Then come the excuses: the small size of the enterprise, the lack of resources, the lack of qualified personnel, the lack of medical facilities, and so on.

To sum up, it is essential to ask the question “What will I do if an accident happens?” and to write down the reply or give verbal instructions (if the person cannot write) to ensure appropriate action in an emergency.

2 ILO: World Labour Report 2 (Geneva, 1985). Editor’s note: A more recent estimate is provided in Kofi A. Annan: “Occupational health and safety: A high priority on the global, international and national agenda”, in Asian-Pacific Newsletter on Occupational Health and Safety (Bangkok, ILO), 1997, No. 4, p. 59.