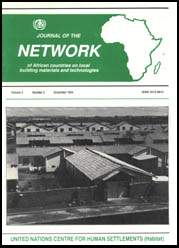 The Intermediate Technology Development Group (ITDG) in collaboration with the Ministry of Lands, Housing and Urban Development, of Uganda organized the Regional Workshop on lime and alternative binders for East Africa, which was held in Tororo, Uganda from 6 to 10 December 1994.

The workshop brought together 60 participants who were mainly experts or decision-makers in the sector. The workshop was also attended by a number of International Consultants as well as Representatives of UNCHS (Habitat) and the United Nations Industrial Development Organization (UNIDO).

As part of the preparations, a series of studies were undertaken by various national "lime experts" from the region including small-lime producers and users themselves. Three broad types of studies undertaken included:

2. Four national surveys of the use of hinders in low-income housing in both rural and urban areas in Kenya, The United Republic of Tanzania, Uganda and Zanzibar;

3. Four national surveys of the production and use of binders from the three East African countries plus Zimbabwe.

The workshop was concerned about the prevalent lack of adequate and affordable shelter for the majority of the region's population. The high cost of building materials, particularly cement, was noted as a major contributing factor to this problem, whereas unnecessarily high and restrictive standards and regulations do play a role as well. Lime and other binders, which could replace cement, are produced in the region on a small scale: they need to be further popularised and producers as well as users made aware of more appropriate technologies for their production and application. The workshop noted with particular concern that most producers of such materials do make excessive and inefficient use of fuelwood and that this has a serious impact on the environment, and that urgent steps are needed to improve this situation.

After the presentations of the various surveys and case studies in the plenary sessions the participants split into three working groups. These groups focused mainly on producers, users and policy makers. Each group identified the main problems faced by the binder sector and formulated recommendations and action plans to resolve or minimize the problems. A total of 13 main issue/problem areas were identified and deliberated upon. The workshop made some resolutions and formulated recommendations and action plans.

International Conference on Re-appraising the Urban Planning Process as an Instrument of Sustainable Urban Development and Management,

The Conference was jointly organized by UNCHS (Habitat), the Urban Management Programme (UMP) and the Housing and Urban Development Corporation (HUDCO) of India.

The Conference was attended by more than 95 participants representing 36 countries as well as a number of United Nations Agencies, intergovernmental and non-governmental organizations.

Opening addresses were made by: the Deputy Secretary General of the Second United Nations Conference on Human Settlements, the Director of Cooperate Planning, Housing and Urban Development Corporation (HUDCO) of India and the Minister of Local Government of Kenya.

Having identified and reviewed the major issues, the Conference addressed the many deficiencies in traditional urban planning techniques and approaches. Although some questioned the relevance of urban planning, the Conference reached broad agreement of the necessity for continuing planning interventions to support efficient and equitable urban development. However, such interventions should reflect the view of planning as a process rather than as an end-product. Urban planning should focus on supporting urban development in ways which focus on aspirations and quality of life and which give greater emphasis to the community's people and organizations which make city economies work. Planning as a process recognizes that these tasks require much stronger political support at the local and higher levels of government and should reflect changing institutional frameworks, including trends to privatization and deregulation of services. In parallel, the Conference recognized that improved urban planning systems should form an integral component of urban management.

The full text of the report of the conference which includes the conclusions and recommendations is published and distributed by UNCHS (Habitat).

Expert-group Meeting to Review the Draft of the
Second Global Report on Human Settlements,
Nairobi, Kenya, 29-31 May 1995

The General Assembly of the United Nations, in its resolution 34/114 of 14 December 1979, instructed UNCHS (Habitat) to prepare, on a periodic basis, a "Global Report on Human Settlements" according to the objectives, format and contents set out in the report of the Executive Director to the Commission on Human Settlements (HS/C/2/8.22 February 1979). The main objective of the Global Report is "to provide a complete review of human settlements conditions, including an analysis of major forces and trends accounting for both their present developments and their continuing creation, maintenance and improvement". The prime purpose is to analyse world-wide and regional developments, trends and future prospects in the field of human settlements.

The general objectives of this Expert Group Meeting is to review the first draft of the Second Global Report, to provide comments and suggestions that could help till identified gaps, update and enrich the Report.

The Meeting of Ministers will review the in-country preparatory process for the Habitat II and draft and adopt a declaration.

Meeting of the Ministers in-charge of Housing and
Urban Development of the Subregion of Central
Africa, Comoros and Djibouti and of Uganda and
Senegal, Brazzaville, Congo, 10-12 April 1995

The Meeting of Ministers while considering the Declaration adopted in Nairobi by African Ministers on the 30 March 1994, will draft and adopt the Brazzaville Declaration.

African countries are rapidly urbanizing, and it is envisaged that most sub-Saharan African countries will be over 50 per cent urban by the year 2010. The rapidly increasing pressure on urban areas is causing considerable strain on towns and cities in terms of the need to expand and create new infrastructure, provide basic social services and create employment. The demand in each area far outstrips the supply, while the majority of the young school leavers are streaming to the main towns in search of employment.

The workshop will be organized jointly by UNCHS (Habitat) and the Ford Foundation and its main objective is to build capacity at national and municipal levels for tackling the problems of urban poverty and governance.