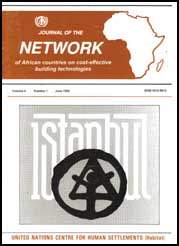 Habitat II - Conference closes as Habitat Agenda is Adopted, UNCHS to be Strengthened as Implementing Agency

The Habitat II Conference succeeded in all of its major goals of putting the problems of human settlements at the centre of the local, national and international agenda and sharing solutions aimed at improving life in human settlements. This was said by Habitat II Secretary-General Dr. Wally N'Dow.

Included in the process for the first time were representatives from cities, the private sector, other local authorities, grassroots organization and non-governmental organizations (NGOs), instead of just national governments. This bold move paid rich dividends in terms of generating enthusiasm and interest as well as enriching the understanding of all issues which were being addressed.

"This Conference recognized the changing global patterns of life, recognizing that solutions also must be found at the local level"....... National governments and international agencies cannot solve nor pay the solutions to these massive urban problems" said Dr. Wally N'Dow.

"Habitat II has revolutionized how the United Nations will conduct future conferences," Dr. N'Dow said. "The United Nations and its conferences have grown beyond being a forum for just countries, and will from here on better reflect the dynamic cities and local organizations."

The burgeoning growth in global population, which will rise from today's 5.6 billion to some 8.5 billion by 2025, can only be sustained in cities. The Habitat II Conference recognized this new reality, that the Earth's rural areas cannot absorb an additional three billion people, because the land cannot support them without devastating environmental consequences.

Dr. N'Dow added that "the major theme of the Conference is that cities are the world's future and that they can be made liveable. A second theme is that half the world's people still live in rural areas, and the same improvements in the way people live can be applied to these areas as well."

The problems of human settlements are many - the world population is growing at the rate of a quarter of a million people daily. Currently, some 100 million human beings, most of them women and children, are homeless. Overall, at least 600 million people live in shelters that are life - or health - threatening in developing world cities.

"This Habitat conference, however, has demonstrated conclusively that all of this hardship is completely unnecessary, that the resources exist to put a roof over the head and bring safe water and sanitation, for less than $100 per person, to every man, woman and child on this planet." said Dr. N'Dow.

Dr. N'Dow emphasized that a major advance of the Conference was in its emphasis on the crucial role of women in the sustainable development of human settlements.

Women constitute 70 per cent of the world's 1.3 billion absolute poor, and 50,000 women and their children die daily as a result of poor shelter, water or sanitation. "But thousands of women have come to Istanbul, many from the grassroots level, to seek deeper commitments from the international community to change the conditions that keep the majority of women powerless and poor"...... "We have kept this commitment. The primary role of women in human settlements has been strongly recognized by this Conference".

"The empowerment of women and their full and equal participation in political, social and economic life, the improvement of health, and the eradication of poverty are essential to achieving sustainable human settlements", says the final Habitat document.

Dr. N'Dow added that the delegates bridged differences during the final work on the "Habitat Agenda: Goals and Principles, Commitments and Global Plan of Action," and that this itself was a sign of the vitality of the United Nations system.

"Anyone who believes that our global conferences consist of dry debate with the outcome preordained did not sit in on any of the spirited discussions that went on during Habitat II".

The primary disputes arose over the definition of the "right to housing," the question of whether developed countries should greatly increase aid to developing ones to improve shelter, and women's reproductive rights. Recognition of the right to housing was framed as follows: "We agree to take all steps necessary for the progressive realization of the right to adequate housing." Issues that are part of the Habitat Agenda but not core issues have been defined in relation to spiritual and cultural values.

"We have resolved most of these questions, through vigorous debate and consensus," said Dr. N'Dow. "A major reason why debate was so spirited was because of the fresh infusion of voices into this UN conference, from city and other local officials, NGOs and grassroots organizations."

"The Global Plan of Action" puts the primary responsibility on countries for carrying out the Habitat programme, but cities are

"The Habitat Agenda is a global call to action at all levels," the final document says. It offers, within a framework of goals and principals and commitments, a positive vision of sustainable human settlements - where all have adequate shelter, a healthy and safe environment, basic services, and productive and freely chosen employment. The Habitat Agenda will guide all efforts to turn this vision into a reality."

Note: Text taken from a press release produced in Instanbul