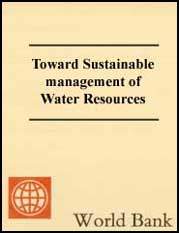 Although we have a renewed appreciation for the many functions played by water, we are also more aware of our failure to manage the resource properly. During the 1980s major efforts were made to extend water and sanitation throughout the developing countries. However, the majority of poor people are still without safe drinking water and adequate sanitation services; 1 billion people lack an assured supply of good-quality water, and 1.7 billion have no adequate sanitation (figure 1). In urban areas, the number of people without access to sanitation actually increased by about 70 million in the 1980s. The health consequences of such service shortfalls make water a life-and death issue for millions of people. Water-related diseases account for 8 percent of all illnesses in developing countries, affecting some 2 billion people annually (table 2). It is estimated that 2 million children die from such diseases each year, deaths that could be averted if water supply and sanitation services were adequate.

Beyond the overarching human and equity arguments, economies also suffer because of poor water management and inefficient investment. Debilitating waterborne diseases reduce human productivity, especially in rural areas. Lack of access to water in developing countries takes a different kind of toll: women represent the most potentially productive part of the population in poor countries, yet many of these women spend a good portion of each day walking long distances to collect water for drinking, cooking, and cleaning. Finally, underpricing has resulted in inefficient use and misallocation of water. In both industrial and developing countries, agriculture, which takes the lion's share of available water, is an especially low-value user compared with municipalities and industry. This has serious economic consequences.

Access to Safe Water and Adequate Sanitation in Developing Countries, 1980 and 1990

We continue to ignore the critical role of water in maintaining the quality of the environment and the link between a healthy environment and a healthy economy. Already half of our coastal wetlcallds have been drained for infrastructural or agricultural development and in many places groundwater is seriously at risk from overexploitation and contamination by urban and rural pollutants and the intrusion of saltwater. Sewage and industrial waste pollute rivers on every continent By some estimates, the amount of water made unusable by pollution is almost as great as the amount actually used in the human economy.

Clearly, current water policies and management practices are not sustainable from any perspective: social, economic or environmental.