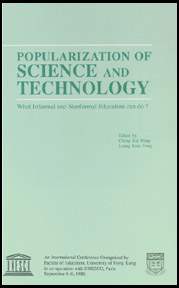 Nonformal education: A hinge between science and culture - Camillo Bonanni

In this paper the term Education is understood to mean the laborious process by which human beings acquire an awareness of new goals, the freedom of making choices in relation to them, and the intellectual and technical skills required for attaining them, while the term: Non-Formal Education is a conjunct, dynamic in its nature and flexible in its modes, consisting of socio-education activities leading to cultural adaptation to change as well as of non-structured, non-graded, nonsequential learning experiences.

These socio-educational activities and learning experiences are offered to groups and individuals involved in a transformational process so that they could possess that knowledge, those skills and those abilities which are indispensable for the implementation of the practices required firstly for achieving and then for keeping their new standards of life.

This compound of socio-educational activities and learning opportunities is particularly necessary in those geographical areas where economic development projects are taking place and a marked educational deficit exists.

Previous experiences (Panama, Tanzania, Nigeria, Thailand, India, Cuba, China, Vietnam) have shown that the main aims of developmental projects were attained more easily in situations where an acceleration in the rhythm of social change was produced by an educational action.

Now, if we take into consideration the fact that developmental processes are put in motion by a dialectic contraposition between tradition and modern science and technology we ought to assign, without any hesitation, to the expression: “Popularization of Science”, not the meaning of scholastic lectures on scientific themes, but that of a process of endogenous transformation from old traditions into new practices, tributary to a scientific approach to the reality.

Health and nutritional developmental programmes, sanitation and water supply schemes, projects aiming at increasing basic grain production, agrarian reforms, resettlement and employment plans, establishment of agro-industries, ect: all of them, every where in the world, narrate the story of an unceasing journey of mankind from tradition to science and technology.

How exactly does a Non-Formal Education action fit within this journey?

We think that a Non-Formal Education intervention will facilitate and accelerate any process of change, not imposing new values, but contributing to the regeneration of the existing ones, on the basis that traditions are not immutable paradigms but, on the contrary, they themselves are vectors of transformation. By its action local communities will be surely lead to modernize their living conditions, smoothly, harmonically and without traumata.

To substantiate the above mentioned statements we would like to introduce the hypothetical case of an Health Non-Formal Education Scheme, addressed to rural communities, aiming at transforming magic and religious traditions, inherent in health and diseases, in new preventive and therapeutic practices, based on scientific criteria.

The traditional medicine is ruled by three basic principles: the first attests that the human being cannot be separated from his social, religious and physical environment; the second one is that human body is a whole and must be cured as a whole and not only in some of its parts or organs; the third one is that the natural milieu, being panteistic, i.e. having life and intelligence, does permit the transfer of an illness from a free or from an animal into a person and vice versa, this consequently leads to the belief that the reestablishment of the environment’s harmony, through purification, group-ceremonies, animals’ sacrifices and dancing performances, will, no doubt, send away all diseases from a community.

Together with these cultural performances the traditional medicine often adopts also individualistic curative measures such as that of administering vegetal potions, which are made of roots, seeds and leaves of certain plants having therapeutic qualities.

The modern medicine, on the contrary, being focused mainly on the individuality of each patient and based on the recognition, as causes of diseases, of pathogenic agents, generally prescribes cures consisting in dietary rules and in the supply of chemical medicaments.

It should be clear that to improve the health at the well-being of the rural communities many of the old traditions, no longer in line with the complex present reality, need to be transformed in modern concepts and practices, congener to science and technology.

This, however, has to be done without undermining the intrinsic structure of the social groups and their expectation of continuity, as well as without opposing in a strong way traditional beliefs, which alone ensure the efficient relationship between human beings and their natural environment.

Let us see, in the following paragraphs, by which progressive steps a Non Formal Education Scheme could contribute to the attainment of the above mentioned targets.

Operators of the scheme ought to be a health educator, a social animator and an advisor in popularisation of science.

They should elaborate, in the beginning, a design, which should be articulated in the following successive phases.

The first phase will be the preparatory one and it will consist in:

a) The acquisition of knowledge and understanding on the social structure of rural communities, on their value system, on their traditional views vis-a-vis health and diseases, on their demographic characteristics and on their anthropological and ethnographic roots (the findings of these investigations should be then presented to the attention of the communities, so that their members could feel that their own traditions were considered of great value by the Non-Formal Education operators);

b) The making of an inventory of the substances employed by the local pharmacopoeia specifying their qualities, so that the phyto-therapeutic patrimony of those communities will be known;

c) The identification of the traditional rural institutions that already exist in the area, selecting among them those which possess a potentiality for adaptation to new concepts and practices;

d) The motivation of those members of the communities whose role is that of upholding traditions, such as local healers, civil judges and elected or hereditary leaders, so that they could be induced to become the main agents of change within their communities.

The second phase will be the participatory one. It will consist in making people sensible to the new approaches to health and this target should be attained by organizing group-discussion, panels, A/V presentations, questions-answers exchanges in the course of which an ensemble of new concepts on health and diseases should be conveyed to the groups, favouring their absorption by dialogues and conversations.

All the information on scientific and technological concepts should be given in non-structured, non-graded and non-sequential ways and should be close to the life experiences of the members of the communities. Moreover bridges should be built in order to establish direct communication lines between scientists and people.

The third phase will be the operational one. It will consist in introducing to the groups new hygienic, preventive and curative practices leaving them free to select those which are better conmensurate to the existing cultural and social structure of their communities.

Successively, according to their choices, modern medical facilities and provisions should be put at the disposal of the rural Communities and integrated, little by little, into the endogenous health system.

This seems to us that it is what Non-formal Education can do in guiding traditional societies towards to undestanding that, to face the problems of the present time, their old patrimony of knowledge and behaviours should be adapted to the methods of modern science.

In conclusion, in the analyses of the role which can be played by Non-Formal Education in popularizing sciences we do realize that it can contribute not only to the infusion of science into cultures but also to the transfer of certain cultural aspects, elicited from the traditional experience of the people’s life.

These latter can emerge during the preliminary anthropological and ethnographic investigations, or the maieutic exchanges of opinions between scientists and members of the rural communities as well as from the manifestations of the creative spirit of the people.

For example, remaining in the field of health, we can acknowledge the following ones: the ecological consciousness linking and interrelating human beings to their natural environment; the strict social integration among members of the same groups; the value and the effectiveness of the phytopathologic traditional pharmacopoeia and the comprehensiveness of basic existential concepts, like the concept of “water”, which is not limited, as it is for us here and now, to that of a physical commodity, but comprises the relationships between water and health, water and diseases, water and sanitation, water and religion, water and the social structure of the community, water and life.

Consequently Non-Formal Education can surely play a crucial role in overcoming the dichotomy, peculiar to all process of change, between imported science and technology on one hand and cultural patrimony of traditional beliefs and customs on the other hand.

In fact, while science encourages culture to adopt models that are innovative and enterprising, and this without undermining the cultural principle of identity, it can be, to its turn, enhanced by elements of traditional wisdom brought forward by culture.

If so, the people, made by education able to master the writing and reading skills, could not only autonomously open the book of science but also add to it additional chapters, containing cultural themes congenial to the needs of our current days.

Finally, it can be said, therefore, that Non-Formal Education may deserve to be designated as a hinge between science and culture.