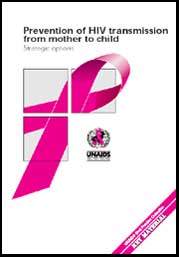 Mother-to-child transmission (MTCT) is by far the largest source of HIV infection in children below the age of 15 years. In countries where blood products are regularly screened and clean syringes and needles are widely available, it is virtually the only source in young children.

So far, the AIDS epidemic has claimed the lives of nearly 3 million children, and another 1 million are living with HIV today. World-wide, one in ten of those who became newly infected in 1998 was a child. Though Africa accounts for only 10% of the world’s population, to date around nine out of ten of all HIV-infected babies have been born in that region, largely as a consequence of high fertility rates combined with very high infection rates. In urban centres in southern Africa, for example, rates of HIV infection of 20- 30% among pregnant women tested anonymously at antenatal clinics are common. And rates of 59% and even 70% have been recorded in parts of Zimbabwe, and 43% in Botswana.

However there is no room for complacency elsewhere. African countries were among the earliest to be affected by HIV, and the epidemics on the sub-continent are therefore well advanced. But the virus is now spreading fast in other regions of the world, and every-where the proportion of women among those infected is growing.

Globally, there are around 12 million women of childbearing age who are HIV-positive. And the number of infants who acquire the virus from their mothers is rising rapidly in a number of places, notably India and South-East Asia.

The effects of the epidemic among young children are serious and far-reaching. AIDS threatens to reverse years of steady progress in child survival, and has already doubled infant mortality in the worst affected countries. In Zimbabwe, for instance, infant mortality in-creased from 30 to 60 per 1000 between 1990 and 1996. And deaths among one- to five-year-olds, the age group in which the bulk of child AIDS deaths are concentrated, rose even more sharply - from 8 to 20 per 1000 - in the same period.