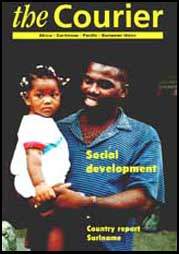 In conjunction with our Dossier on Social we interviewed Riccardo Petrella who is the founder of the 'Lisbon Group'. Under his direction, the Group has just published 'Limits to Competitiveness', a hard-hitting analysis of the globalisation of the world economy. A Professor at the Catholic University of Louvain, Riccardo Petrella isalso head of the social research division at the European Commission. This is an important role in an influential institution, but it do" not appear to limit our interviewee who spoke to us frankly and freely about the key social development issues.

During the 1980s, Suriname took a severe battering. A military coup at the beginning of the decade was followed by a steep decline in the country's economic fortunes. Large numbers of Surinamese emigrated in search of better prospects, taking their vital skills with them. The 1990s have seen a distinct improvement on the political front with the restoration of democracy to this multi-ethnic state on the northern coast of South America. However, despite a well-educated population and a natural resource base which most ACP countries would envy, Suriname still has serious economic problems. Structural adjustment has been been discussed but reaching agreement on what this should entail in practice has proved difficult. We report on the current state of play.

The UN's recent Social Summit in Copenhagen, which focused on the fight against poverty, was the first of its kind to be held. But the declaration which emanated from the conference hall ended up dealing more with principles than with any concrete proposals to help people or countries in distress Was K, therefore, a waste of time? Oddly enough, most interested observers thought not. The Courier considers some of the views expressed at the Summit assesses the results of the discussions and examines a number of aspects of the social development agenda in more detail.

The 14th FESPACO, the Pam-African Festival of Cinema and Television which was held in Ouagadougou from 25 February to 4 March, beat all previous records in terms of the number of participants (both professional and pubic). It also saw the involvement of South Africa for the first time. The Festival 'fringe' included the staging of the seventh Intemational Market of African Television and Cinema (MICA), two colloquia - on the hundredth anniversary of cinema and the participation of women on the African continent - and the opening of the African Film Library. At the end of an exciting week, Malian procurer Sheik Oumar Sissoko was declared winner of the FESPACO 'Grand Prix for his film 'Guimba'. We publish an interview with the new laureate and report on proceedings at the Festival.