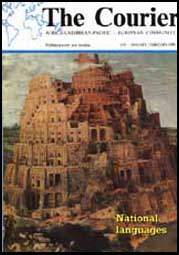 Training and commodities: development priorities for the social partners

Representatives of ACP and EEC economic and social interest groups gathered in Brussels in mid-November for their 13th Annual Meeting. The purpose of such meetings is to taring members of employers’ and workers’ organisations from both the ACP and the EEC Member States in contact with representatives of the EEC institutions, and joint ACP-EEC institutions, to express their views on how best their interests could be served, or safeguarded, in the context of the Lomonvention. This year’s meeting centred on two major themes: firstly, vocational training (with special reference to farmers’ training) and secondly, the deterioration in the terms of trade which has been the fate of most of the ACP States throughout the 1980s.

The meeting took place at a time when, in the words of Edwin Carrington, the Secretary-General of the ACP Group, the negotiations for the new cooperation agreement, LomV, were “nearly finished but far from complete”. So that, despite his implication that much was still missing in the agreement, the new Lomie was virtually cast, and it was not so much a question of the “grass roots” representatives hoping to influence the content of the Convention as of hoping that its content would be given substantiation.

This was, for example, the wish of Sheela Flather, the Rapporteur on the discussion paper on vocational training drawn up by an ad hoc group of the Economic and Social Committee, who rejoiced in the proposed article in LomV on the training of women, in particular, but emphasised that it would be meaningless unless followed by action.

The purpose of the paper, which served as the basis for debate, was both to “highlight the importance of vocational training for the development and growth of the ACPs” and to encourage the stepping up of vocational training, not only as an integral part of development programmes and projects, but as a fit subject of such projects and programmes in its own right. On the purpose of vocational training, as defined in the paper, there was consensus its overall objective should be to “ provide individuals with the necessary skills and knowledge which will contribute to the economic growth of both organisations and countries”. It was a vital activity, and funds for it were equally vital. “The Community”, argued Mr Sada Diallo, a member of the National Employers’ Federation of Mali, “ should make available massive aid for training”. It could also give assistance to its own Member States. One participant, from Ireland, called for help to his country, where a number of training colleges were having to be closed for lack of funds. Mr

Fayese, the Secretary-General of the Nigerian Cooperatives’ Federation, was among several to stress the importance of audio-visual aids, especially of radio which, he said, was “ a much-neglected medium”.

Others emphasised the importance of appropriate vocational training, i.e. in fields where there were jobs to be found. Bakary Karambe, of the Mali Trades Union, pointed to the situation in his country where many who were highly educated (graduates, lawyers) were needing to be re-trained as farmers, because other avenues offered them no hope of earning their living. Gabriella Nimbona, representing a cooperative group in Kigali, Rwanda’ expressed hope that the resolution to be adopted at the close of the meeting would become reality, particularly as regarded the education of women in rural society. “ It is well known “, she said, “ that if you educate a woman, you educate a family”, adding that development projects which had invested in men had not had the same impact as those which had invested in women. She was among many calling for funds for vocational training in the ACP States to be channelled through NGOs. “ Vocational training,’, said Mohamed Ali, of Mauritania, “ is not a monopoly of the State “. Local NGOs, who knew and understood the social and cultural context of training could speak the language of those trained, were at great advantage.

The participants’ final declaration on this theme, affirming that “ a focus on training... would contribute considerably to the development of the ACP countries”, called, inter alia, for greater regional cooperation in training, and in particular for the creation of more regional and sub-regional training centres. The basic training of those involved in farming and non-farming rural activities, it continued, “ will tend to be the teaching of literacy; but it should consist, too, of training in the techniques of crop production and livestock rearing, elementary mechanics, the handling of water, carpentry, environmental protection and the like”. This declaration will now, as is customary, be forwarded to the European Parliament’s Joint Assembly, to the Council, the Commission and to all those participating actively in the Convention in one way or another, in the hope that its various recommendations will be followed up. This, Carlo Casini (Vice President of the Joint Assembly) admitted in his opening address, had not always been the case in the past, or not adequately. But there had at least been recognition of one fundamental principle dear to the economic and social interest groups namely that of genuine polycentric cooperation, i.e. cooperation which functioned through a wide variety of public and private bodies and which kept as close to its beneficiaries as possible, which was becoming a reality in the implementation of the present Convention.

The second theme of the Meeting, that of the deterioration of the terms of trade, was highly apposite, since it had been the inadequacy of the trade concessions that, to a great extent, had caused the most recent round of LomV negotiations to falter a few days earlier.

Summarising the discussion paper for the assembly, Marc Cortois, of the Belgian Confederation of Christian Trades Unions, recalled the trend in commodity prices over the past two decades, a trend which, in the 1980s had been characterised by three main facets: instability in world market prices, deterioration in the terms of trade of countries heavily dependent on commodity exports and a particularly sharp fall in commodity prices between 1980-86, a period when a number of factors heightened the problem of indebtedness. The trend had not been uniform in respect of all commodities and the paper naturally concentrated on those of greatest importance for the ACPs-oil, coffee, copper, cocoa, wood and sugar.

In a nutshell, the situation was as follows: sub-Saharan Africa as a whole had seen export earnings fall by some 30% in the years 1981-87. For the oil-exporting developing countries the fall had been the sharpest (some 50 %), but food-crop exporters had also suffered badly. The trend in import prices (including oil) had also been downward but never by more than 10%, SO that the terms of trade had deteriorated overall, very considerably over the decade.

Mr Cortois went on to analyse briefly some of the mechanisms for offsetting price instability-stabilising commodity prices or stabilising export earnings commenting on the initiatives that had been taken hitherto on price stabilisation and on their relative failure. As to the two export earnings stabilisation schemes now in operation the IMF’s Compensatory Financing Facility and the Lomonvention’s STABEX mechanism, he pointed to a number of measures which could heighten their effectiveness, including, in the case of STABEX, an increase in the level of resources. As to how to approach the problem of the deterioration of the terms of trade in future, the group recommended more attention to the diversification of production and greater encouragement to more processing in the ACP countries of the commodities they produce. “ Such an approach” the discussion paper concludes, “can only produce results in the long term. But to achieve these results, both bottlenecks with which the developing countries are confronted today, viz. the burden of indebtedness and the deteriorating terms of trade, will have to be eased in the short term. Otherwise there will be no scope for the necessary structural approach”.

These sentiments were widely echoed in the discussion that followed. P.A. Thompson of the Caribbean Association of Industry and Commerce welcomed the “long and brutally frank debate” on the issue, “ a debate which had lost none of its daunting complexity in finding a solution”. Some arrangement for better prices and/or better compensation must be found, he said, while the medium- and long-term problems such as product diversification were being addressed. The ACPs had a part to play, it was true, in the form of fiscal and budgetary policy, but the EEC as the richer of the two partners bore the greater responsibility and “ should seize it in the interests of world peace”.

Before concluding their discussions, participants were able to hear of the latest progress in the LomV negotiations from representatives of the ACP Group (Mr Carrington), of the ACP Council (Ambassador Tavola), the EEC Council (Ambassador Vidal) and of the Commission (Mr Riera). (An account of the final developments in the negotiations is given in the News Round-up.) Not all were entirely satisfied with the manner in which matters were progressing-and the overall financial package was, of course, still an unknown factor. But one thing was certain, and participants at this meeting could take particular comfort from it: not only were economic and social interest groups becoming increasingly involved in the Lomegotiations, but there was also ever-wider consensus on the need for them to participate in development projects and programmes themselves. .