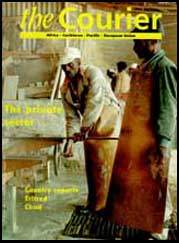 Victor Sable is a likeable man. No-one who has met him has failed to be won over by his joie de vivre. his warmth and a culture embracing literature. the humanities and the law (he was once a lawyer). He has and indeed still has, for he is in fine form - all the quotations and the eloquence of the lawyers of his youth, with, as he admits, a occasional grandiloquence that is both appreciated and necessary in election campaighs in the French West Indies. In this book he recounts lively and amusing memvies of a period covering three Republics.

He hails from Fort de France in Martinique, where his father was a judge in whom 'derisory treatment and noble robes were a natural combination 'although he was very fond of both his (very different) grandfathers Victor Severe, MP and mayor of Fort de France, and Francisque Sable. first deputy mayor in a small local authority in the south.

Victor Sable, an intellectual achiever, went to study law in the Quartier Latin in Paris. He then practiscd as a rawer, but soon became a member of the Council of the Republic. a member of the French National Assembly and a Euro-MP for Martinique (which became a French department in 1946). As chairman of the influential inter-professional Committee for the Banana Industry, he was bound to sit on the European Parliament s Committee on Development, attend ACP-EEC Joint Assemblies and take an interest in the application of Lomnd the basic OCT issues (structural funds tax, agricultural produce, alcohol and sugar).

Like many other West Indians (he himself refers to Professor Louis Achille. as the first coloured person to yet the agregation) throughout his long life Victor Sable has been an example of a combination of cultures, of a tolerant and democratic approach and an art of living which people certainly need in the difficult world of today