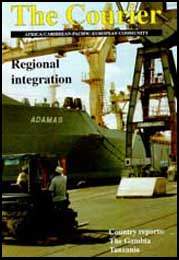 Industrial policy has an essential role to play in the development of ACP countries - it is not enough to rely solely on commodities. This is the firm view of Paul Frix who is the Director of the Centre for the Development of Industry (CDI). In an interview with The Courier, Mr Frix expands on this theme and describes how the CDI works to encourage industrial development in the ACP countries.

THE GAMBIA: Ever since independence in 1965, The Gambia's leaders have gone for a democratic system - a considerable asset nowadays, as it spares the country the political upheavals taking place in most African countries undergoing democratisation. President Jawara and two of his Ministers, Bakary Dabo and Omar Jallow, as well as the principal opposition leader, Shariff Dibba, talk about the progress achieved and the difficulties of a democracy which, when all is said and done, is alive and growing.

TANZANIA: Like the rest of Sub-Saharan Africa, Tanzania is in the midst of political and economic reforms. Unlike others, though, it is finding it particularly tough going transforming a 'socialist' one-party state into a free market multiparty democracy. Constrained by a number of factors, including a certain lack of political commitment within the ruling party, the Government is proceeding cautiously with reforms, the pace of which is, accordingly, slow - too slow for some of the country's principal donors.

Due to the limited size of their internal markets, African countries need to combine their efforts if they want to develop their economies. This necessity is recognised and accepted in theory, but so far, all attempts at integration in practice - whether at the institutional or the market level - have failed. In our Dossier, we examine the reasons for this failure and explore some interesting avenues for the future.