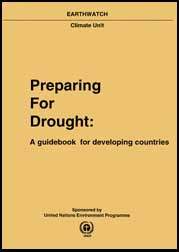 "Droughts affect more people than any other environmental hazard... [and] drought is perhaps the most complex and least understood type of all environmental hazards... Africa has now emerged as the most drought prone continent. To many of the young African states this is a relatively new problem. They have had little training in coping with drought and famine, and foreign aid or advice have not always had a positive effect on them." (Hagman, Swedish Red Cross, 1984)

Drought is an insidious hazard of nature. It originates from a deficiency of precipitation that results in a water shortage for some activity or some group. Although the continent of Africa has suffered the most dramatic impacts from drought during the past several decades, the vulnerability of all nations to extended periods of water shortage has been underscored again and again during this same time period. In the past decade alone, droughts have occurred with considerable frequency and severity in most of the developed and developing world. Brazil, Argentina, Uruguay, Australia, the United States, Canada, India, China, and most of the countries of Southeast Asia are just a few examples of the countries ravaged by drought.

Concern by members of the scientific and policy communities about the inability of governments to respond in an effective and timely manner to drought and its associated impacts exists worldwide. Numerous "calls for action" for improved drought planning and management have been issued by national governments, professional organizations, intergovernmental organizations, nongovernmental organizations, and others. However, the task of altering the perception of policy makers and scientists worldwide about drought and educating them about alternative management approaches is a formidable challenge. Governments typically treat drought as a rare and random event that is inherently unpredictable; they are unprepared to respond effectively when it occurs. Effective drought response requires long-range planning, a difficult assignment for most governments.

Many scientists and policy makers now have an improved understanding of drought and its economic, social, and environmental consequences. Although impediments to drought planning exist, recent progress has created a sense of cautious optimism that society is steadily moving toward a higher level of preparedness. Also, technologies and information are available that would enable countries to more effectively mitigate the effects of drought through the development of a more proactive and systematic risk management approach (Wilhite and Easterling, 1987a).

The occurrence of severe drought worldwide during and following the extreme El Niouthern Oscillation (ENSO) event of 1982-83 partially explains governments' increased awareness and understanding of drought and interest in planning. These droughts have focused attention on the vulnerability and lack of coping capacity of all nations. It also appears that societal vulnerability to drought is increasing, largely because of population growth and society's increasing demand and competition for limited water resources. In addition, many governments now have a better appreciation of the costs associated with drought. These costs include not only the direct impacts of drought but also the indirect costs (i.e., personal hardship, relief costs, retardation of economic development, and accelerated environmental degradation). Nations can no longer afford to allocate scarce financial resources to often short-sighted response programs that do little to mitigate, and may in fact exacerbate, the effects of future drought.

In the public's mind, the subjects of drought and projected changes in climate caused by increasing concentrations of CO2 and other atmospheric traces gases have become inextricably linked. For example, the 1988 drought in the United States was viewed by some scientists (and popularized by the media) as a forewarning of greenhouse warming. Others suggest that changes in climate will lead to an increased frequency and intensity of drought, although these predictions are highly speculative at present (Houghton et al., 1990). However, we do know that droughts are a normal part of climate in virtually all regions; their recurrence is inevitable, with or without changes in climate. From an institutional point of view, learning today to deal more effectively with extreme climatic events such as drought will serve us well in preparing proper response strategies to long-term climate-related issues.

The International Drought Information Center (IDIC) at the University of Nebraska-Lincoln was formed in 1988. The primary goal of the IDIC is to increase awareness and understanding of drought, ultimately leading to a reduction of societal vulnerability through the development and implementation of preparedness plans in all drought-prone nations of the world. One of the first steps taken by the IDIC was the conduct of training seminars on drought management and preparedness for developing regions.1 This guidebook on drought preparedness is one of the outcomes of this seminar series.

1 To date, three seminars have been conducted. The first was held in Botswana in September 1989 for countries in the eastern and southern African regions. The second seminar was held in November 1989 in Brazil and focused on the drought-prone northeast region. The third seminar was held in Thailand in March 1991 for the Asian and Pacific Regions. A fourth seminar is scheduled for the Latin American region in early 1993.

The purpose of this guidebook is to describe those unique characteristics of drought that set it apart from other natural hazards (Chapter 1). The guidebook also describes the nature of impacts associated with drought. Chapter 2 illustrates, through several case studies, how some nations have coped with drought in the past and describes recent attempts to adopt a more proactive risk management approach. Chapter 3 proposes a methodology to assist developing countries in the preparation of drought plans, exemplifying many of the concepts now being incorporated in the national policies and plans discussed in Chapter 2. The final chapter summarizes the key features of the proposed planning methodology, including recommendations for governments and international organizations.