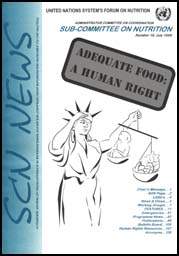 Supplement on Methods and Statistics to the First Report on the World Nutrition Situation, December 1988 (out of print)

Effectiveness of Vitamin A Supplementation in the Control of Young Child Morbidity and Mortality In Developing Countries, by G.H. Beaton, R. Martorell, K.J. Aronson, B. Edmonston, G. McCabe, A.C. Ross, B. Harvey. December 1993 (SOA No. 13)

Women and Nutrition Background, and papers presented at SCN Symposium, held at UNICEF, New York, February 1989. Papers include "Beating the Zero Sum Game" by McGuire and Popkin, "Reflections from India and Pakistan" by Chatterjee and Lambert, "Grameen Bank Experience" by Quanine, "Improving the Nutrition of Women in Tanzania" by Kisanga, "Nutrition Security System at Household Level" by Bajaj, "Issues in Need of a Global Focus" by Ghassemi, October 1990. (SOA No. 6)

Women's Role in Food Chain Activities and their Implications for Nutrition, by Gerd Holmboe-Ottesen, Ophelia Mascarenhas and Margareta Wandel, May 1989. (SOA No. 4) (out of print)

No. 16 July 1998 Features: Nutrition of the School-aged Child; A summary of Working Group discussions, Oslo 1998; Abstracts from the Symposium on Challenges for the 21st Century: a Gender Perspective on Nutrition through the Life Cycle

No. 15 December 1997 Features: Effective Programmes in Africa for Improving Nutrition; the 10th Annual Matin J. Forman Lecture: How are we doing in International Nutrition?

No. 13 late 1995 Features: Interview with Dr A. Horwitz, SCN Chair, 1986-1995; Behavioural Change and Nutrition Programmes; and Poor Nutrition and Chronic Disease Part I.

No. 12 early 1995 Features: The Role of Care in Nutrition - A Neglected Essential Ingredient; Summary of findings from the recently published ACC/SCN "Update on the Nutrition Situation, 1994"; Specific Deficiencies Versus Growth Failure: Type I and Type II Nutrients; and Enrichment of Food Staples Through Plant Breeding. A New Strategy for Fighting Micro-nutrient Malnutrition. (out of print).

No. 9, mid 1993 - Focus on Micronutrients. Features: Addressing Micronutrient Malnutrition, Micronutrient Deficiency -The Global Situation, Effectiveness of Vitamin A Supplementation in the Control of Young Child Morbidity and Mortality in Developing Countries, Zinc Deficiency - Is It Widespread but Under-Recognized? (out of print).

No. 7, mid 1991 - features: Refugees' Nutrition Crisis, Breastfeeding, Birth Spacing and Nutrition, Community-Based Development - From a Programme Towards a Movement, Micronutrient Intakes, Incomes and Prices. Supplement: Some Options for Improving Nutrition in the 1990s - Reviews experience of policies and programmes, and grouping nutrition issues, leads to identifying options as building blocks for future action.

No. 4, late 1989 - features: Update on the Nutrition Situation, Women and Nutrition, Malnutrition and Infection (Part I), Targeted Food Subsidies. (out of print).

Please send me the following Back numbers of SCN NEWS [Unfortunately, No. 1,4,6,9 and 12 are out of print).