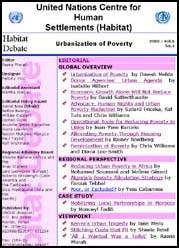 'All I Wanted Was a Toilet!'

Why Voices of the Poor Matter

It was a typical seminar, like many held in cities around the world. A group of government officials, academics, non-governmental organization (NGO) leaders, donor agencies and United Nations officials sat on an elevated podium to discuss the problems of the poor. The audience comprised representatives of the various sectors.

At the back sat a group of slum dwellers who were invited to participate in the proceedings. However, as the language used by the panelists was foreign to them, and the sentences lofty and verbose, they sat in numb silence, counting the minutes to when they could leave and attend to the many chores they had left behind at home.

Suddenly, the leader of the group of slum dwellers ¾ the only one who had been invited to address the gathering ¾ stood up and declared that she had only one comment to make to the illustrious group: Being a woman, she had to observe some standards of modesty in her slum and, unlike the men, could not use open spaces to relieve herself. Confronted with this dilemma, she had gathered a few like-minded women who had managed to collect enough money for a community toilet. Her request was simple ¾ she wanted toilets for her people. Nothing more, nothing less. A simple facility that would save women in her slum from constant humiliation.

Lana, the leader of the group, is not a beneficiary of any government or donor-aided programme. Her only claim to fame is her determined activism, which led NGOs to recognize her as a crucial partner in their efforts to reduce poverty in her slum. She runs her own charcoal-selling business and is a devout Church-goer. As a result of her activism, she has gained a large network of women who now form the core of her self-help group. Recently, she caught the attention of an international donor agency and was sent on an exchange programme visit to a slum in another part of the world. She is now a celebrity of sorts, being the only one in her community who has a passport and who has traveled abroad by air. Despite the accolades, her fight for toilets continues. Many listen and applaud, but few have made an effort to ensure that the toilets are built.

Lana is no ordinary woman. Yet, for many development practitioners, she is just a statistic - one of the growing numbers of "urban poor". However, if you asked Lana who she is, she would probably say that she is a businesswoman, a mother, an activist and a Catholic (not necessarily in that order). Poverty is just a circumstance she finds herself in - it does not define her. She is sad, yes, that her children cannot go to the best schools, that her back aches from constantly carrying water from the municipal tap or that she cannot afford new shoes. At some levels, though, she counts herself as lucky. She is admired and respected by her community and her small business saves her from the worst degradations of slum life - at least she is not a prostitute or a criminal, the worst fates that can befall people in her slum. Lana may be bordering the international poverty line, but her determination and social networks (also known as social capital) have saved her from crossing the line into absolute poverty.

Recently, a group of government officials and Council staff visited Lana’s slum and announced that they would soon "bring development" to the area by demolishing the slum and putting up high-rise housing units - complete with shared bathroom and toilet - which slum residents could own. The only snag was that the payment per month for owners of the new units would be five times the amount of rent they were paying now.

Lana cannot afford to buy into the scheme. She doesn’t want to move to another (affordable) slum either. She has now mobilized her self-help group to fight against the government plan. "All I wanted was a toilet," she says. "Now they want me to buy a house I cannot afford."

The New Rules of Development Cooperation

Lana’s case illustrates how even the most well-intentioned projects can fail if they do not incorporate the real needs and opinions of those they seek to assist. However, international development cooperation agencies and governments are now beginning to see that urban poverty reduction strategies that do not take into consideration the opinions of the poor are bound to be ineffective.

This fact was recognized by the 1996 Habitat II Conference which became the first UN Conference to engage civil society in Conference deliberations and which provided a space to local authorities and NGOs to participate in conference proceedings, either as part of national delegations or through "Hearings".

Even traditionally hard-line institutions such as the World Bank are beginning to incorporate poor people’s views in their strategies. The Bank’s Voices of the Poor study, conducted as background for the World Development Report 2000/2001 (1), is based on the realities of more than 60,000 poor women and men in 60 countries. The study found poor people tend to measure their poverty not only by their level of material deprivation, but also by the level of vulnerability in their lives, especially to events and institutions outside their control. These include institutions of state and society that treat them badly and the lack of a voice and power in those institutions. Hence, while poor people are often willing to be active agents of change in their own lives, they are often powerless to influence the social and economic factors that determine their wellbeing.

The United Nations Development Programme (UNDP)’s Poverty Report 2000 (2), proposes the reform of governance institutions and the shifting of decision-making power closer to poorer communities so as to make pro-poor policies more effective. Instead of targeting a few donor-aided projects at the poor, says the Report, anti-poverty plans need effective coordination by a government department or committee with wide-ranging influence.

For this to happen, accountability in the use of public funds is crucial. "If corruption were cleaned up at the same time that the poor organized themselves, many national poverty programmes would undoubtedly ratchet up their performance in directing resources to people who need them," it says. "Many problems of targeting are, at bottom, problems of unaccountable, unresponsive governance institutions...Most critical, (poverty reductions plans) should be nationally owned and determined, not donor driven."

However, in a world where access to global opportunities and resources are not equally shared, poor countries have very little bargaining power in determining how anti-poverty programmes are implemented. Past experiences with colonialism coupled with inept leadership within some developing countries have contributed to ensuring that poor countries remain poor and that the ideological, political and economic interests of wealthy countries continue to dictate global policies.

With increased competition for dwindling international aid, the rules of development cooperation have also shifted to suit the domestic and international priorities and agendas of wealthy donor countries. (In 1996, for example, the Organization for Economic Cooperation and Development (OECD) countries’ resources for development cooperation fell to their lowest ever level - to just 0.25 per cent, or a quarter of 1 per cent -- of GNP. An average of 22 per cent of donor aid is actually given on the condition that it be used to purchase goods and services from the donor country.(3))

This scenario is compounded by the recent trend towards liberalization, privatization and globalization, which has led some people and countries to believe that the global market will soon replace development cooperation because it will ensure economic growth and development in all countries. Others believe that allowing market forces to direct the fate of all human beings will lead to a situation where the economy will determine the rules and ethics in society, when it should be the other way round. Globalization has also had the net effect of concentrating power and wealth in a select group of people, nations and corporations, while marginalizing others. For instance, OECD or industrialised countries, with 19 per cent of the world’s population, currently account for 71 per cent of global trade in goods and services, 58 per cent of foreign direct investment and 91 per cent of all Internet users. (4)

In its World Development Report 2000/2001, the World Bank admits, "in a world where political power is unequally distributed and often mimics the distribution of economic power, the way state institutions operate may be particularly unfavourable to poor people." But it does not address the issue of how political and economic power can be shifted or balanced at the global level so that poorer countries have a greater choice and a voice in how they manage their affairs.

A stronger and more coherent United Nations could provide the global leadership needed on issues of equity and justice. However, there is still a need to understand why, despite intense anti-poverty programmes in the last decade, poverty is still a key problem facing developing countries. The World Development Report 2000/2001 indicates that from 1987-1998, while the share of population in developing and transition countries living on less than a dollar a day fell from 28 per cent to 24 per cent, because of population growth, the number of people in poverty hardly changed. In fact, except for East Asia, the Middle East and North Africa, the number of people living in poverty in other regions has actually increased.

One explanation for this rise could be that present poverty reduction efforts actually work against the interests of the poor. As the UN Secretary-General, Kofi Annan, indicates in his Millennium Report (5): "The gross disparities of wealth in today’s world, the miserable conditions in which well over a billion people live ... make the present model of development unsustainable, unless remedial measures are taken by common agreement." If the UN is to become "a global public trust for all the world’s peoples", as proposed by Mr. Annan, then it must ensure equitable management of global processes. And it must hear and take into account the voices of people like Lana.