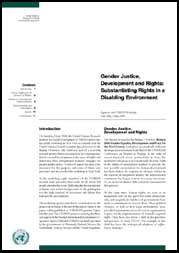 A related, and perhaps the most politically sensitive, issue surrounding rights-based strategies is whether and how such strategies might find a universal application, yet without denying cultural specificity. While the language of rights and citizenship has a broad appeal, and is politically acceptable and effective in some countries, others may respond to it with suspicion. The claim is sometimes made that universal rights and norms are a form of Western hegemony and are inappropriate for other cultural contexts. This raises particular problems for women. Women have often served as signifiers of cultural difference and as guardians of traditional cultural practices. Where this infringes on their rights and contradicts their self-identity, tensions have arisen between those who define such cultural practices as necessary and those who are expected to comply.

Liberal political theory is grounded in the twin principles of universal and individual rights - rights guaranteed by the rule of law. Such principles were determined in opposition to arbitrary and particularistic rights that were, for example, invested in castes and estates, or in ethnic groups, as in South Africa or colonial Latin America. The principles of universalism and of rights held by individuals served as a guarantee against certain abuses of authority and as a way of ensuring equal treatment before the law.

Recently, however, in the liberal tradition, there has been greater recognition of the need to accommodate group interests and group rights. Liberal individualism has been criticized by communitarians for its privileging of individual rights over social responsibilities. More recent critiques from the new communitarians seek to ground the exercise of law and political power in society and thus challenge ideas of universal rights. Such rights, it is argued, abstract struggles for equality and freedom from the particularities that surround them, making it difficult to respond to the challenges of multicultural environments. Instead of universal norms of justice, arguments are made for justice that is relative to the social meanings it has in a given community. Indeed, this view seems to accept only limited outside criticism of a society’s norms.

While there is considerable sympathy for the idea of greater tolerance of diversity in a broadly multicultural global sometimes national environment, there are also problems in the concept of multiculturalism as it is often used. In the first place, it raises many questions regarding the relationship between individual and group rights, how they are to be distinguished and how clashes between them are to be reconciled. This problem is posed acutely in regard to women’s rights: What happens when cultural practices and group rights contradict the rights of women, or minorities, to live with dignity and without fear? Multicultural approaches to community and culture, as many have argued, have often failed to address the issue of difference and diversity within the community, nation or group within the nation, as in multicultural contexts.

While at its best multiculturalism can publicly highlight the fact that the political community is a complex cultural and ethnic aggregation of indigenous groups and immigrant settlers, it can also misrepresent cultural communities as internally homogeneous.

The presentation on Mexico noted that the 1992 constitutional amendment defining the Mexican nation as multicultural represented an important recognition of the rights of indigenous people’s to their cultural identity. This was followed by a series of changes in the penal code recommending the consideration of cultural norms and practices when judging crimes committed by individuals who belong to an indigenous ethnic group. This, however, raised a number of questions about the interpretation of indigenous cultural and customary law. The example was given of a particular case where a husband murdered his 12-year-old wife for disobedience and then justified the crime on the grounds that it was sanctioned by customary law. Indigenous women’s groups have contested the claim, while other indigenous movements have sought to redefine their rights more in accordance with international and national norms that treat women as equals. This illustrates a more general point: sometimes people men in positions of power who do not want to see any change (in response to women’s movements speaking the language of rights of various kinds) turn to culture as a useful way of resisting the pressure for change. What traditions, then, are essential to preserve the integrity and sovereignty of nations and cultures? Is there some way of reconciling such traditions with a quest for gender equality?

The presentation on Uganda noted that women’s movements had challenged cultural practices that were harmful to women, such as female genital mutilation. They had more success when, rather than openly confronting community authorities, they were able to enter into dialogue with them based on an understanding of prevailing cultural norms and values. The evidence showed that culture was more adaptive than sometimes claimed, and that cultural identity did not have to depend on practices that harmed women.

Another difficulty with the conventional definition of multiculturalism is that the idea of culture is often reduced to religion. For instance, religious authorities become the spokesmen (and they usually are men) for an ethnic community, and questions of the rights of individuals within a particular tradition are left to them. There is also a tendency in this approach to freeze individuals into one of their identities. But people’s identities very often include a wide range of influences (ethnic, class, gender, professional, religious, etc.). The focus of identities often shifts depending on the contexts in which people find themselves. Different historical situations can enforce some individual and collective identities, and thus promote certain ethnic projects more than others.

In today’s increasingly globalized world, it is difficult if not impossible to find a hermetically sealed culture. The challenge at the core of debates about human rights and multiculturalism is how to acknowledge and respect difference without reifying it as perpetual, closed and unchanging. How does one negotiate the difference between cherished ideals of equality and cross-cultural differences?

Ideas travel. Human rights are owned by women’s movements across the world. The language of rights is a mode of expressing justice claims and presenting them to those in positions of power.

Conference participants expressed the view that the West has no monopoly on ideas of rights and justice. Whether arising from indigenous traditions or through a long historical process of transnational dissemination, ideas of rights have a wide moral appeal and they have served as the basis for collective and individual claims for justice across the world. If there is to be a meaningful international consensus on rights, and especially on rights for women, this can only be achieved as part of a process of dialogue in which women’s voices are heard. This again reinforces the centrality of women’s political presence in such dialogues - the theme that was explored in session two of the workshop.

In the context of immense inequalities of power between countries, it is not difficult to understand why caution is warranted against the outside imposition of rights on the weaker members of the world community. Indeed, the recent imposition of policy conditionalities by the multilateral financial institutions on many Southern indebted countries has made any discussion of human rights in multilateral settings extremely difficult. But at the same time, the history of internal contestation reinforces what should be the starting point for thinking about issues of multiculturalism and rights: that cultures are not monolithic, are always in the process of interpretation and reinterpretation, and never immune to change. But this does not mean that we should assume that criticism is only legitimate when there are internal critiques, and not otherwise allowed. Criticism will certainly be better informed when there are internal as well as external critics, and the resulting dialogue may well lead to a different understanding of values and rights. We should not, however, conclude that there is nothing to be said about abuses of women’s rights until these abuses have been challenged from inside.