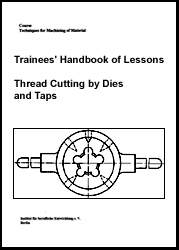 1. Purpose and importance of thread cutting by dies and taps

The two threads each consist of a couple of parts, namely an internal thread and an external thread. The mode of operation is determined by shape, diameter and pitch of the thread. Thread cutting is a sort of chip removal and can be undertaken by mean of a die, tap or lathe. Thread cutting by dies and taps is very easy and serves to manufacture vee-threads which, in turn, are perfectly adequate for moat fastening threads regarding:

3. Preparations for thread cutting by dies and taps

Prior to thread cutting by dies and taps, position in readiness and in proper order all required tools and auxiliary means, allowing so quickest possible access times.

In this connection, pay attention to the following rules:

- Check that all tools function properly; do not use defect tools.

- Working means to be used must not be stacked one above the other.

- Place all measuring and testing tools at the places provided therefore.

- Lay aside tools only when properly cleaned.

- Select all necessary auxiliary means in line with the work assignment and position solely on the provided supports.

The setting-up of the lathe is mainly made according to the following points:

- Chucking the workpieces for thread cutting

· Extending soft chuck jaws as, normally speaking, the lathe parts to be processed have already been preworked. Extending the chuck jaws ensure the true running of the parts and the workpiece surfaces are not impaired.

· Checking the proper dimensional preparation of the thread diameter and deburring.

The thread diameter roust be turned about 1/10 smaller than the thread pitch as, whilst cutting, the tool somewhat compresses the material, pressing it outwards. Consequently, the external diameter increases and the die may tear out the thread turns.

If the diameter is too small the thread cannot be fully cut. Sound deburring ensures a faultless starting taper. Precise true running of the workpiece is the precondition for a uniform starting taper of the thread turns.

- Clamping the tools for thread cutting

· The die is fixed to a die capsule and then, together with the capsule, accommodated in a die holder (or directly in the die holder).

· The die holder inclusive of the capsule and die must be thoroughly cleaned so that the front surfaces are positioned properly and in a distinctly angular manner.

· Use an unhardened thread bolt to set the die.

· A support for the die holder is chucked in the tool holder.

· The support for the die or tap wrench holder must be securely chucked and selected according to the thread length.

· The tailstock quill is brought into working position (Fig. 14) whereby special attention must be given to quill cleanliness.

· When thread cutting by a tap, the tap wrench is positioned on the tap square.

· When thread cutting by a tap ensure correct centring and tailstock middle-positioning.

Generally speaking, low cutting speeds are selected because of the substantial cutting operation (entering, plug tap and plug third tap in one work sequence), coupled with complicated chip removal. The selected cutting speed depends on the workpiece material and the thread size. When using a die on steel workpieces the cutting speed is 3 - 4 m min-1 and 4 - 15 m min-1 when employing a tap.

Which rotational speed shall be selected where a thread M 24 x 100 is required for 100 bolts given an St. 60 material?

Thread cutting by dies produces an external thread. The work-pieces are processed on the external surface.

- Operations are carried out in chucked conditions.

- Often extended chuck jaws are employed in order to ensure true workpiece running and not to damage the surface of the pre-worked parts.

- The die is positioned by means of the quill.

- The first thread turns must be cut by hand.

- After the initial cut machine processing follows with the help of a support for the die holder. (see Fig. 14)

- The chip chambers must always be kept clean.

- Turn back the die by hand after having completed the work sequence.

External thread results from outer surface processing of the workpiece.

- The workpiece is clamped in the extended chuck jaws.

- The die is brought into position with the help of the quill.

- The first thread turns are cut by hand.

- Following the starting cut machine processing is made with the help of a support for the die holder.

- Ensure that the chip chambers are kept clean.

- Switch off the lathe 2 - 3 mm before reaching the shoulder and cut the remaining thread turns by hand in order to prevent tool breakage and ensure sound quality.

- Turn the die back by hand upon ending the work sequence. Having completed the thread, deburr all sharp edges with a finishing file.

- Ensure proper cooling and lubrication. Only measure and check with the machine at rest.

6. Thread cutting by taps on through holes

Internal threads are produced by thread cutting by using taps. The workpiece surfaces are processed by means of bores.

- The workpieces are clamped in the extended chuck jaws in order to guarantee true running and top surface quality as the parts have generally already been processed.

- The tap wrench is positioned on the square of the tap.

- The tap is positioned by means of the tailstock tip which is aligned to the centring of the tap.

- The tap wrench holder is positioned on a surface clamped into the tool holder.

- Turn back the tap several times to remove the chips and clean the chip grooves.

- Turn back the tap by hand upon completing the work sequence.

- The thread is checked by means of a thread ring mandrel.

The internal threads are produced by processing the workpiece surfaces by means of bores.

- work is made in the chuck.

- the workpieces are clamped in extended chuck jaws.

- the tap wrench is positioned on the square of the tap.

- the tap wrench holder is on a support.

- turn back the tap several times to remove the chips.

- the required thread depth is controlled on the quill by means of a steel band measure.

- switch off the machine 2 - 3 mm before ending the work sequence and cut the remaining thread turns by hand in order to prevent tool breakage and ensure sound quality.

- turn back the tap by hand after having completed the work sequence.

- the thread is checked by means of a thread ring mandrel.